An article by Jessica Stewart on mymodernmet.com - 6 Incredible Facts About the Prehistoric Altamira Cave Paintings - reports on how the cave paintings in the cave of Altamira give us an understanding of life in prehistoric times. 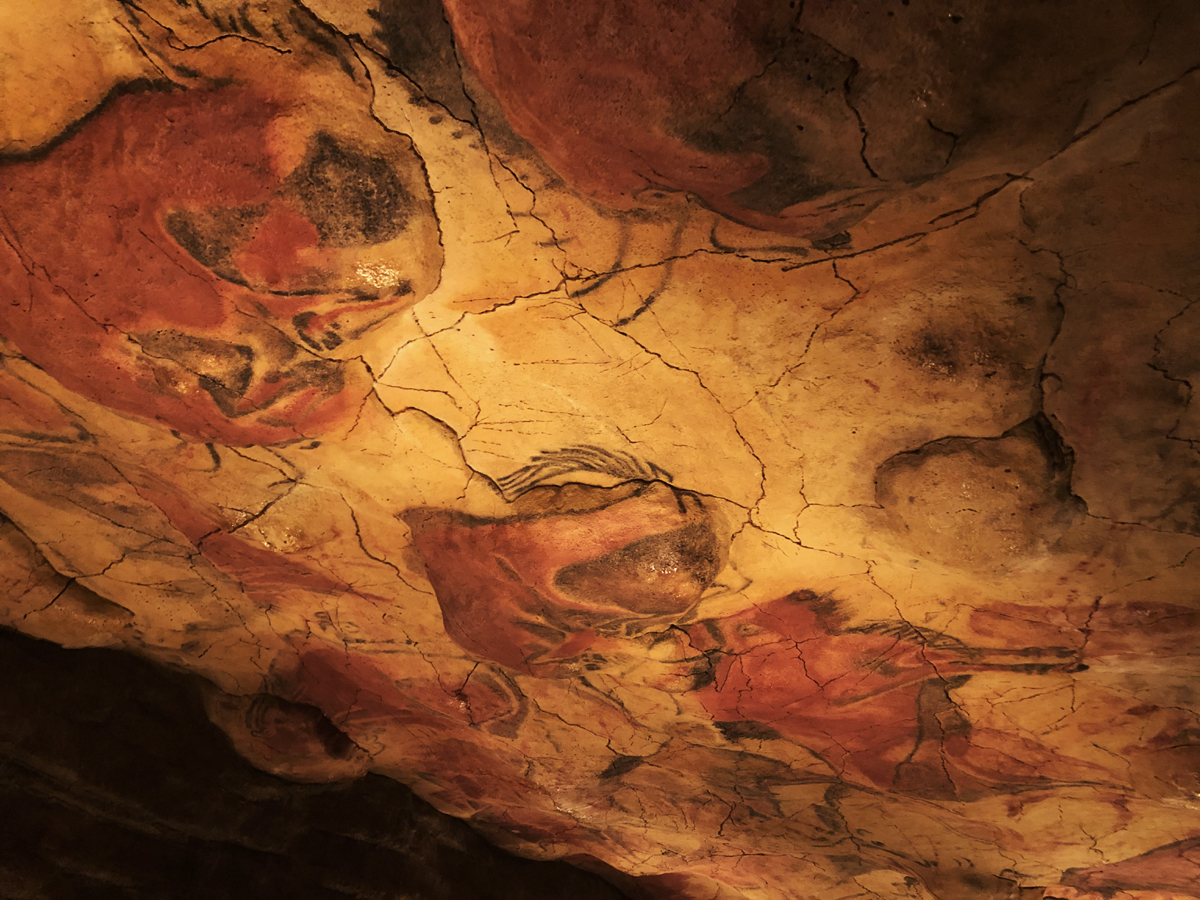 The Polychrome Ceiling in the cave of Altamira

Located near Santillana del Mar in Cantabria, Spain, the cave of Altamira 'is a treasure trove of information about life in the Paleolithic period.' From rudimentary stone tools to bone carvings, there are many artifacts that give a glimpse into daily life during the Stone Age. But, above all, this UNESCO World Heritage Site is known for its enormous collection of cave paintings. Only discovered in the 19th century (because the entrance was covered during a rockfall), the well-preserved paintings revolutionized the way we think about prehistoric art. And here are 6 important points. 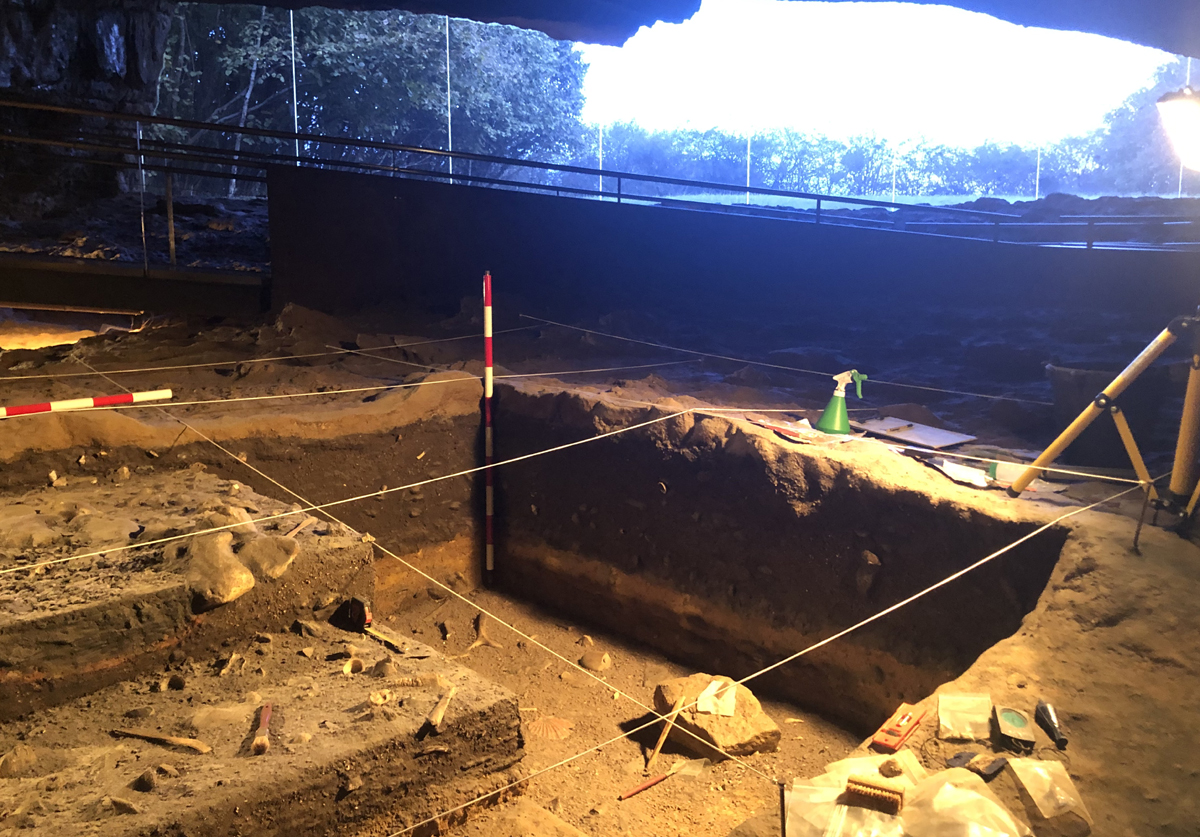 A demonstration of the excavations in the Altamira replica - the 'Neocave'

A YOUNG GIRL’S OBSERVATIONS HELPED LEAD TO THEIR DISCOVERY. The caves were first discovered in 1868 by a local hunter named Modest Cubillas. He told the owner of the cave, nobleman Marcelino Sanz de Sautola, about what he found, but Sanza de Sautola didn’t make his way to the caves until 1876. Once there, he wasn’t impressed by what he perceived as senseless symbols. But, after a trip to the 1878 Universal Exhibition in Paris, where he saw pieces of caved bone similar to what he’d seen in the cave, he realized that it was something special.

This led to him partnering with Juan Vilanova y Piera, an archeologist from the University of Madrid, to start excavations in 1879. At first, they began unearthing animal bones and small tools. It was actually Sanza de Sautola’s 8-year-old daughter Maria, who accompanied him to the caves one day, who first noticed paintings of bison within one of the chambers. The findings of the excavations were published in 1880 but were dismissed by most scholars, who took the paintings for modern forgeries. It was only at the turn of the twentieth century, when other similar paintings were found in the region, that they were acknowledged as the genuine artworks we know today.

Based on the dating of different objects found in the caves, archeologists are certain that there were two main cultures that used the location — the Solutrean (about 21,000 to 17,000 years ago) and the Magdalenian (around 11,000 to 17,000 years old). Using uranium-thorium dating, researchers in 2008 discovered that the paintings themselves were probably created over a span of 20,000 years. A later study in 2012 confirmed that there were at least 10,000 years between different paintings in the caves. 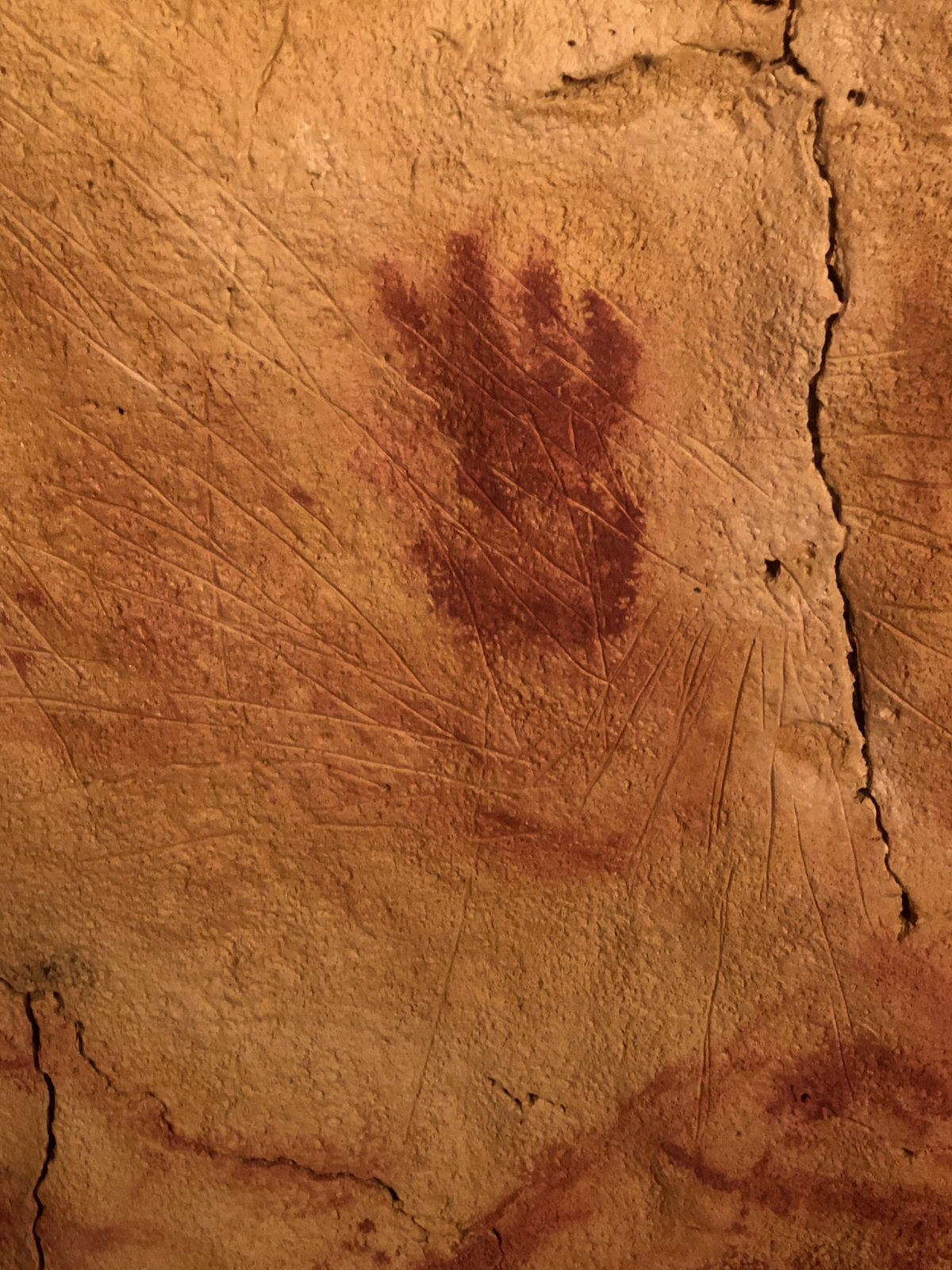 A hand print in Altamira

ARTISTS HAD CRAMPED QUARTERS TO EXECUTE THEIR PAINTINGS. The Altamira cave is 971 feet long. Humans only inhabited the entrance chamber. Paintings are found throughout the cave, some painted over others, creating a palimpsest of art. The famous paintings of Altamira are on the ceiling of the main chamber - the Hall of the Paintings - which is astounding when one considers that the chamber has a variable height of 3.8 feet to 8.7 feet. This meant that most of the artists had to crouch down as they worked. The art is a combination of engraving and painting. Most figures were first etched into the stone with tools and then painted over in black, red, and violet hues. As the most realistic and sophisticated paintings, these were created by the later Magdalenian culture. 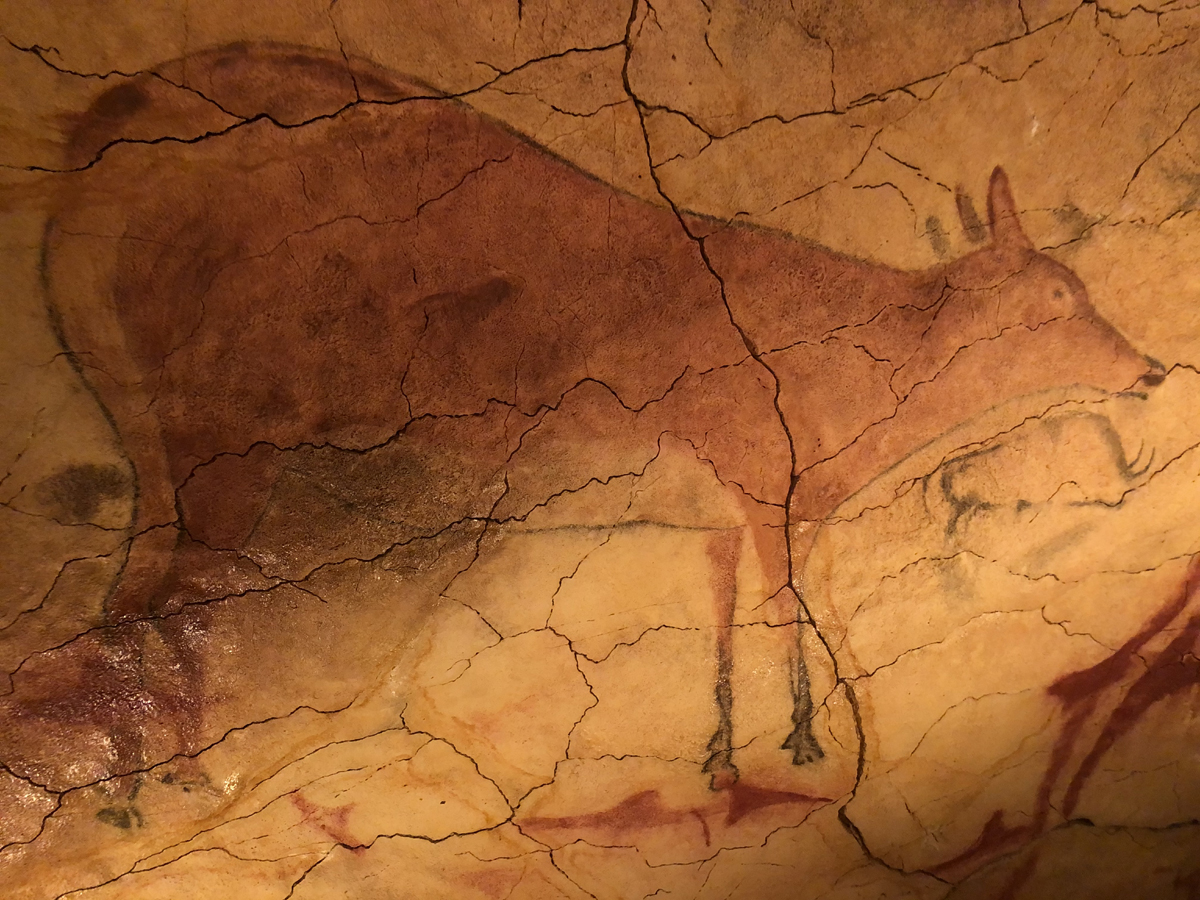 A hind on the Polychrome Ceiling

ANIMALS ARE A DOMINANT SUBJECT IN THE CAVE PAINTINGS. With such a long period of production, the cave paintings are obviously varied. However, animals are the dominant subject; 25 colored paintings of bison, deer, and horses etched and then painted on the roof of the cave. One female deer (above) measures over 6.5 feet. Charcoal was used to make black lines, while they ground hematite to create the red ochre used to fill in shapes. Older paintings in the caves include positive and negative images of hands, many depictions of deer, and 'masks' created by drawing eyes and a mouth around bumps in the stone. Indeed, the three dimensional nature of the rock surface was used to give volume to figures. 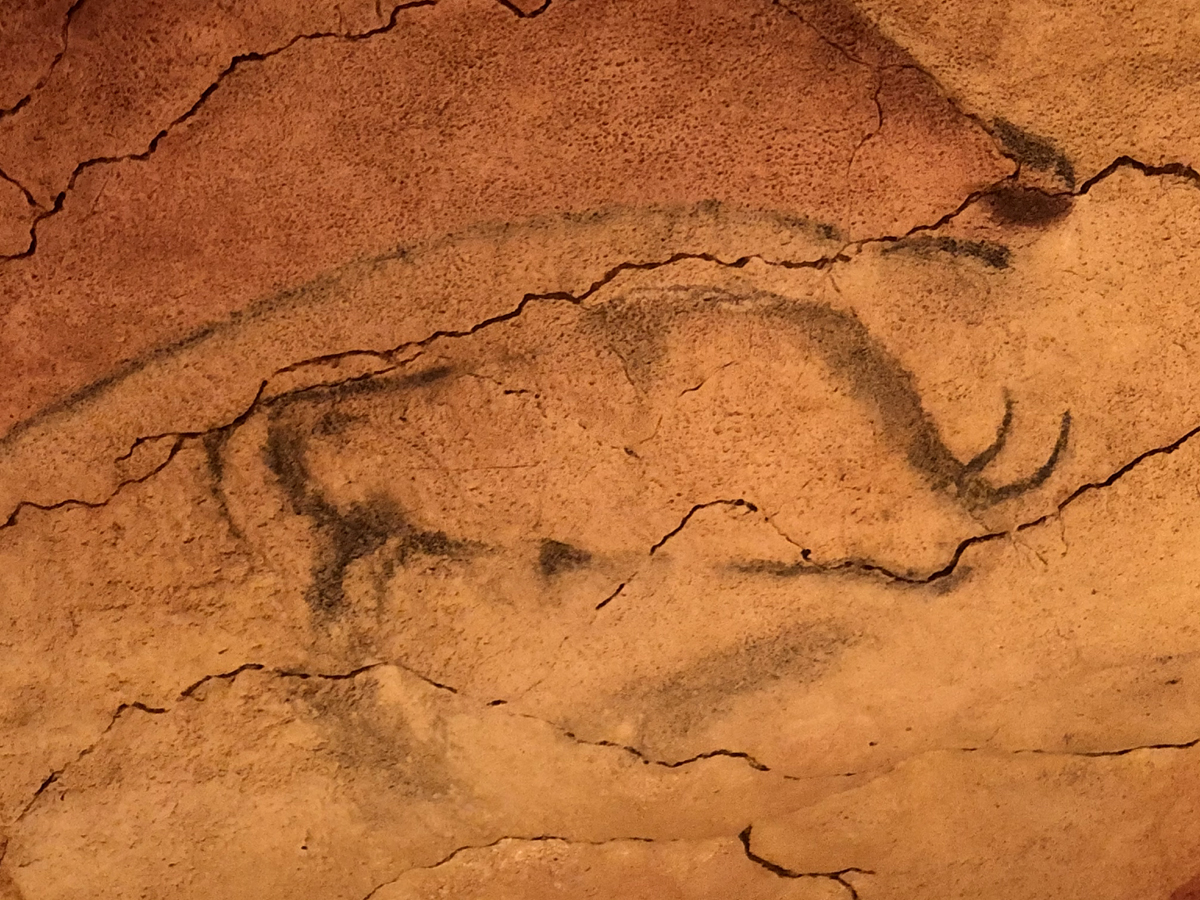 A bison drawn in charcoal

ALTAMIRA SHOWS AN IMPORTANT STEP FORWARD IN THE HISTORY OF ART. Altamira is vital for learning more about daily life in the Paleolithic Period. In terms of art history, the cave paintings executed during the late Magdalenian culture, which include the bison and deer, are of vital importance. They show a realism and sophistication that is unparalleled for the time. In fact, the best example of art by the Magdalenian is located in Altamira. 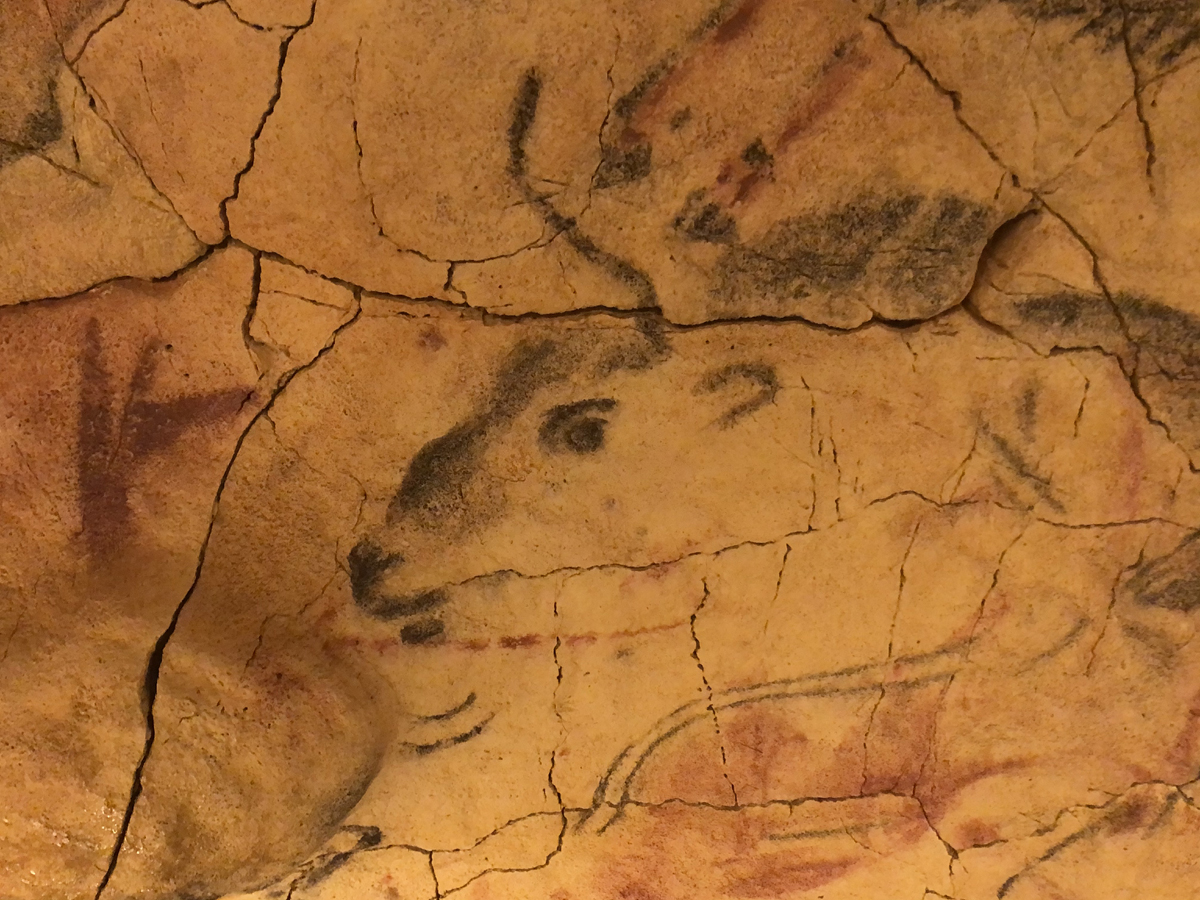 The Palaeolithic art of Altamira

THE PAINTINGS MAY HAVE BEEN USED IN RELIGIOUS RITUALS. While researchers don’t know exactly why these cave paintings were created, their production certainly shows that these cultures had the leisure time to produce them. This points to cultures that weren’t only surviving, but thriving. In terms of a specific purpose, some experts believe that the paintings may have been used during a ritual where a shaman would enter the cave and go into a trance in order to make contact with spirits.

click here to read more about the cave of Altamira