Pech Merle is a cave in the Lot departement of the Midi-Pyrenees region in France. The cave walls are decorated with paintings and engravings, from the Gravettian culture some 25,000 BC, through the Solutrean roughly 18,000 BC, to the Magdalenian era, about 15,000 BC. The prehistoric art was discovered as recently as 1922.

Many important works of prehistoric art are on display here, and perhaps the most famous panel is that of the Spotted Horses. These large iconic paintings, adorned with hand stencils, seem to be imbued with symbolic significance; it is a busy panel. The horse on the right of the panel suggests that the natural rock topography in the shape of a head inspired the paintings. This use of natural shapes on the cave walls was a common practice in Palaeolithic rock art. The daubed-on dots are not restricted to within the outline of the equine figures. 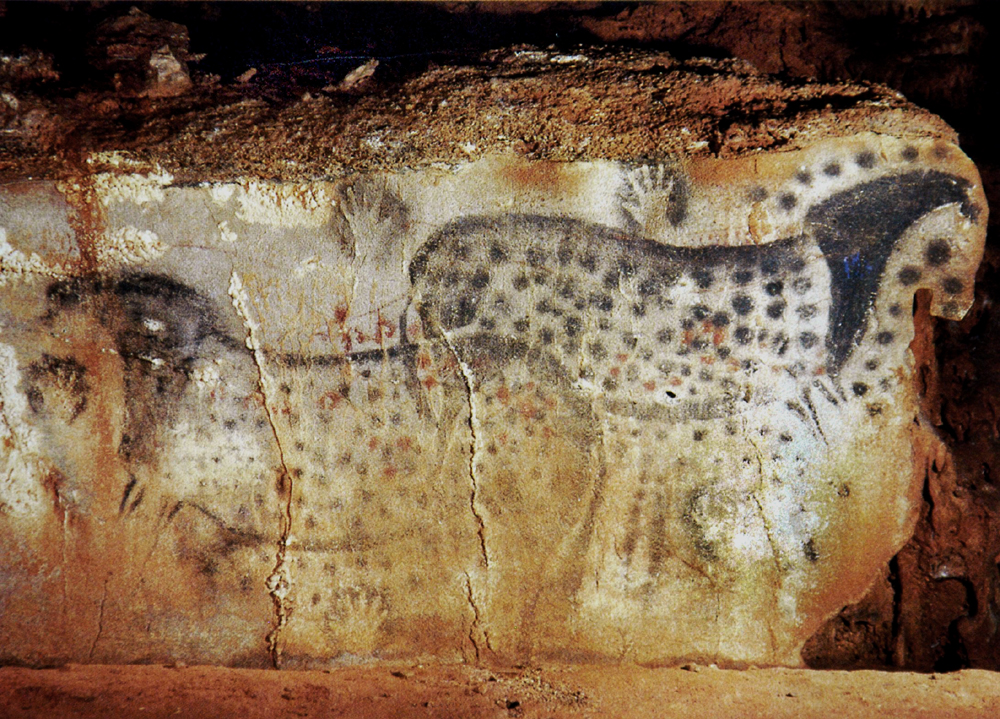 The significance of the Spotted Horses has been greatly debated. Professor Barbara Olins Alpert of Rhode Island School of Design, in her paper 'The Meaning of the Dots on the Horses of Pech Merle', Arts 2013, 2, 476-490; doi:10.3390/arts2040476, argues that that the artists were not accurately depicting the animals as they saw them in their environment. She considers the use of similar dots and dappling in the rock art of other Palaeolithic rock art sites, the visual effect of dots and their psychological impact, and the neuro-scientific effects of such stimuli on human cognition. Olins Alpert argues that the dots on the horses of Pech Merle do not serve a descriptive purpose, but carry a symbolic meaning as well as a transcendental connotation.

Other images in the cave include woolly mammoth, single coloured horses, bovids, reindeer, handprints, human figures and geometric signs. There are also the preserved footprints of children.

The cave at Pech Merle is open to the public, for groups limited in size and number.