A note from the authors:

India is one of the countries in the world with the most rock art sites. A majority of them are in the centre of the country. In this book we have recorded and studied sixty three painted sites in the State of Chhattisgarh, something which had never been done before.ntion that our human artistic capabilities had evolved, over time, from simple to complex. When art first appeared, it appeared full-blown in a technically and aesthetically sophisticated fashion.'

We thus went several times to Chhattisgarh to find, see and record as many rock art sites as we could, with the help of the local authorities and people. Our purpose was to see enough painted sites in the State to provide a solid basis for a synthesis on the art there and for the ritual practices still going on, along the same lines as we did before in Madhya Pradesh. The number of sites we visited and recorded provided that basis. 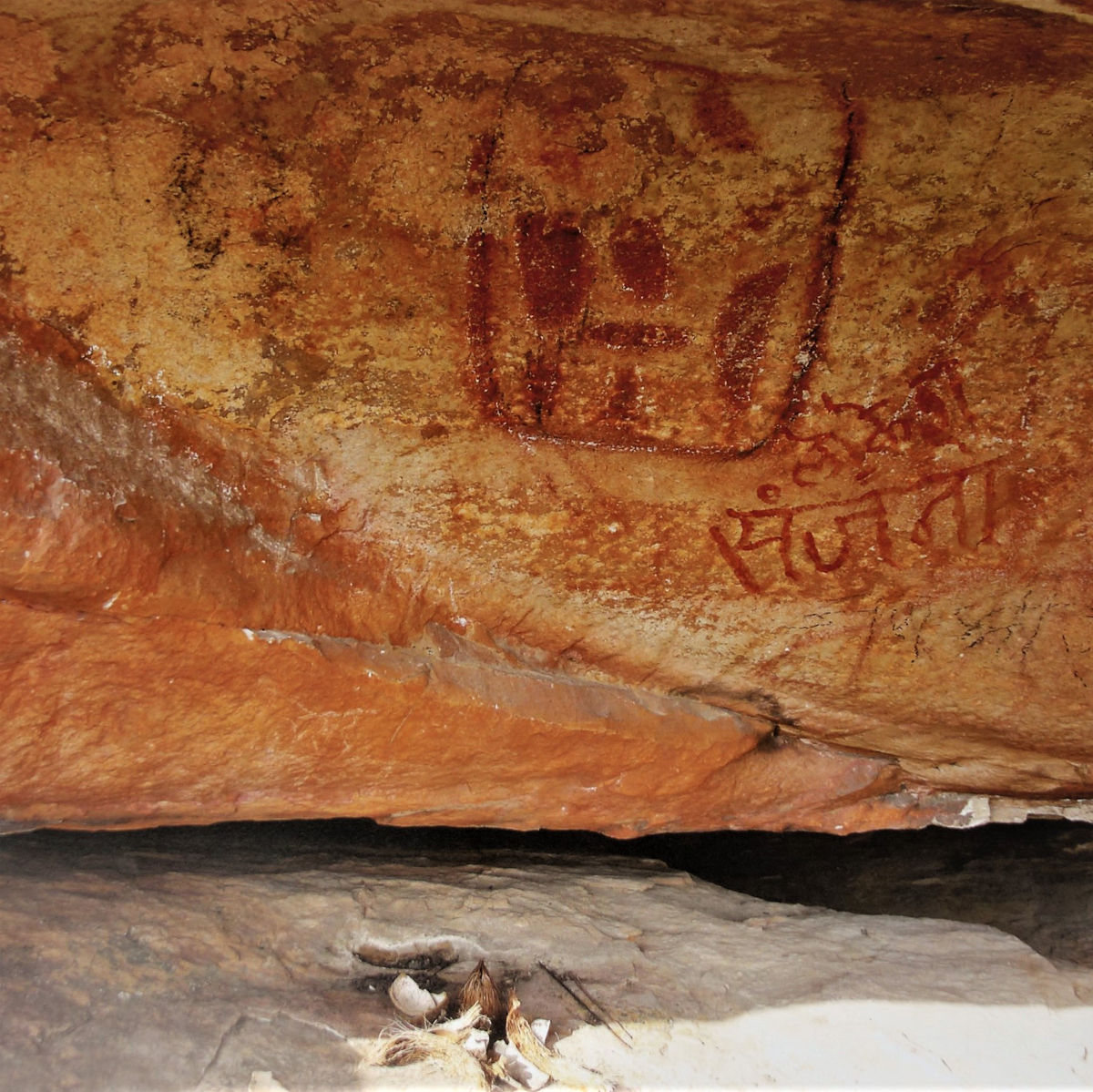 Handprints on the outside wall of a house in Gudiapara village, Dantewada area. Image: Dubey-Pathak & Clottes

One of the most important characteristics of Chhattisgarh rock art is that it goes on being revered by the local people. This persistence of age-old beliefs and ceremonies concerning rock art sites has become extremely rare in the world nowadays and unfortunately it is fast coming to an end, even in India. Loss of meaning may entail loss of respect and eventually degradations and loss of the site itself.

May our book, with its images and testimonies, help in making as many Chhattisgarh people as possible realize that their rock art, such as it is, and while locally respected and revered, is a major cultural asset for all. May they develop a sense of pride in it and help protect the art and its surroundings now and for the times to come.

This attractive publication is laid out in an orderly fashion; it provides a cultural context followed by an in-depth analysis of the major Chhattisgarh rock art sites, as well as the smaller ones - sixty three painted sites no less - before segueing into tribal art, the perpetuation of ritual ceremonies and practices in the rock art sites and the intriguing 'memory pillars'. The rock art depicts animals, humans, handprints and geometric designs, belonging to a tradition that is at least 8 to 10,000 years old. Where the art has faded, the images of the paintings have been enhanced by Jon Harman's software tool DStretch (as indicated in the captions), enabling both further discoveries and finer analysis. 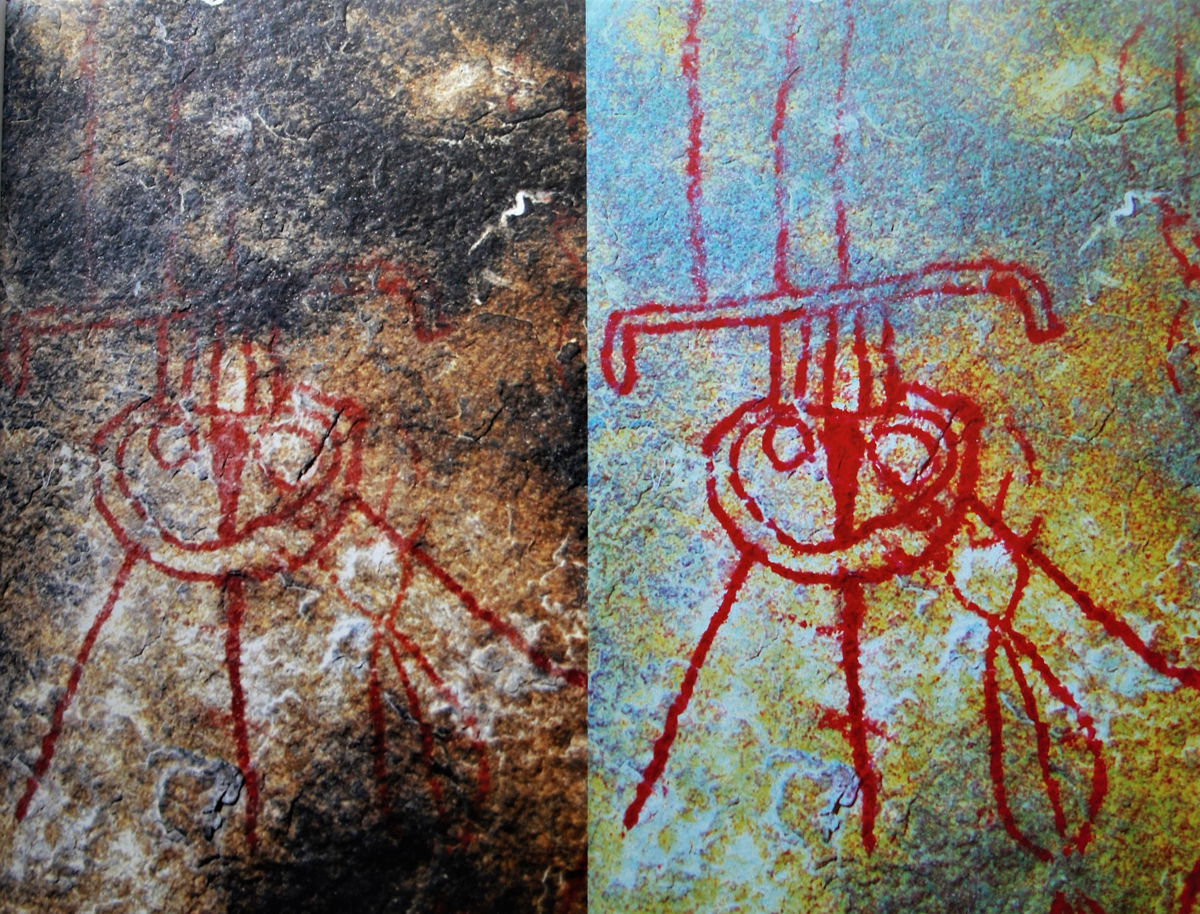 'Powerful Images' is a clever title for this new publication. In regions of India, the rock art image (and the place of the image) still retains power. It transcends time.

While we can be rightly impressed, and sometimes overwhelmed, by the deep time associated with the Palaeolithic art found in the famous caves of Europe, in many ways it is the relatively recent rock art found around the world that should be seen as equally important. For as the authors point out, based on the evidence before them, this more recent rock art of the past often has a direct connection to the tribal art of the present: 'traditional ceremonies, followed since time immemorial, were still taking place in various painted shelters at auspicious times of the year' which 'thus, give an unexpected new dimension to Indian rock art.'

This itself brings the rock art to life and gives it a relevance. It is not a dusty relic, but in fact an active portal to power and knowledge. Sadly, however, whilst rock art is still potent, it is increasingly delicate. 'Powerful Images' highlights this irony well.