An article by Krithika Varagur on theguardian.com - World's oldest art under threat from cement mining in Indonesia - reports on the threat from a cement mine in Indonesia to some of the oldest known figurative paintings in the world. 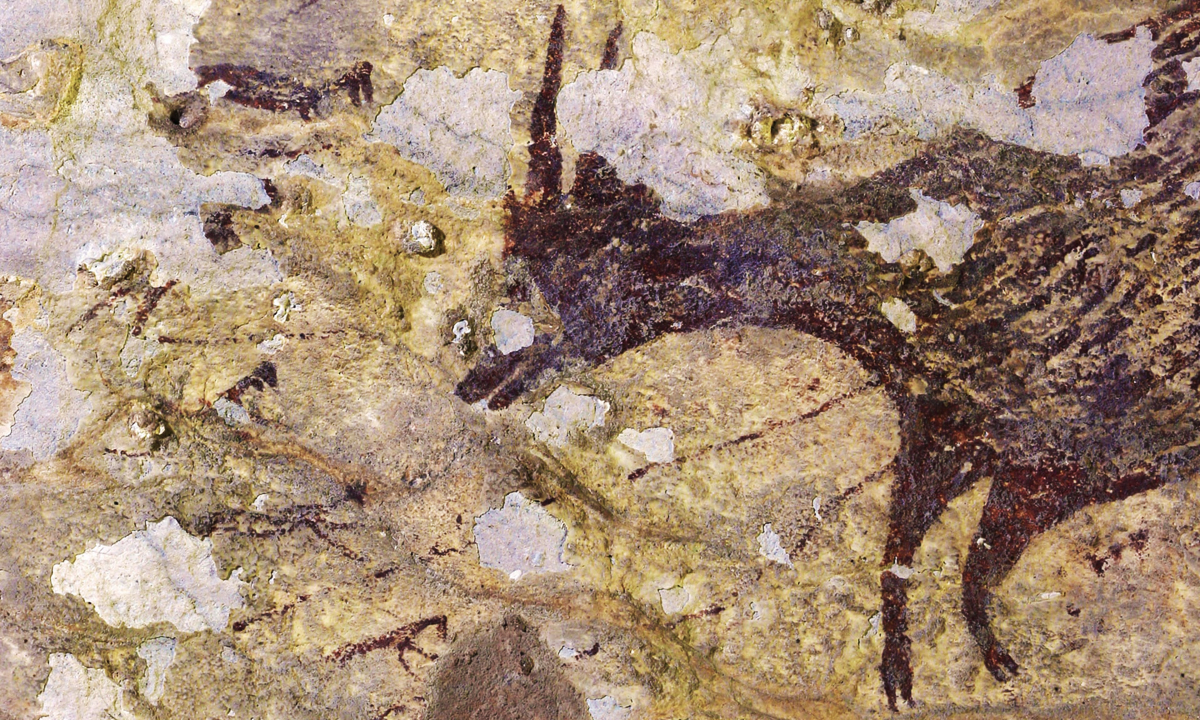 In December 2019, cave paintings depicting a hunting scene on the Indonesian island of Sulawesi were dated to at least 40,000 years ago.

But their condition is fragile. They are located inside land controlled by the Tonasa Cement Company, which determines who is allowed to visit the site. Although Tonasa has cooperated with local bodies to secure the area, mining continues all around the site.

Regional officials and scientists are now racing to funnel more protection and resources into the archaeologically significant region of Maros-Pangkep in South Sulawesi, where even more ancient discoveries may lie.

“As a researcher who has spent my whole career in South Sulawesi, I’m very concerned about the condition of the prehistoric caves here, which are now surrounded by cement and marble mining,” said Budianto Hakim, an Indonesian archaeologist who was involved in the recent research on the rock art.

Soon after the cave paintings were discovered in 2017, Tonasa agreed to protect 3.6 hectares around the Bulu Sipong caves.

Abdul Rasak, head of mine reclamation at Tonasa, said: “As soon as we learned about the discovery , we raised the area’s status to a protected cultural heritage site.

“We didn’t know the significance of it, we thought they were just pictures, but now, as children of this region, we are proud of what our ancestors did.”

If the company finds any more cave art in their extensive concession, they are supposed to alert the local heritage body, said Budianto. No new discoveries have been reported so far.

“We take them at their word,” said Budianto. “But of course, they as a company have different motives than us researchers. If they report it, they may lose some profits.”

Tonasa, the largest cement producer in eastern Indonesia, continues to mine around the protected area. Trucks loaded with limestone and raw materials are visible every few minutes crossing the dirt road in front of the cave.

Maxime Aubert, an Australian archaeologist and co-author of the research about the paintings published in the journal Nature, said dust from nearby mining operations remained “the most immediate threat” to the cave paintings, along with vehicle fumes from the dirt road across the site.

The rock art is in a limestone karst landscape. Limestone is the raw material for cement and the global appetite for the product threatens karst ecosystems across south-east Asia.

“Nearby mining activity definitely affects these paintings, because it creates vibrations, affects the karst’s delicate hydrological system, and creates temperature changes that can damage them,” said Budianto. Tonasa representatives disagree that the mining activity has these effects.

Tonasa company officials said they were planning to expand cultural tourism to the site, build a museum and encourage more visitors to see the paintings. Currently, only four people at a time are allowed inside the chamber, but there are no physical barriers from touching the ancient artwork.

Aubert and fellow researchers wrote recently that the paintings site was “crumbling away before our eyes” and that they had “observed the alarming deterioration of this art at almost every location.” At some sites, they found 2-3cm patches of rock containing art were disappearing every couple of months.

The authors urged action to preserve what they described as “a gift from the dawn of human culture”.

“There are now over 300 prehistoric art sites in Sulawesi and and dozens more are discovered every year,” said Aubert. “If only one site like that was found in France or Spain this would be a major discovery. This area is key to understand our species’ cognitive and cultural evolution.”