An article by Harriet Sherwood, Religion correspondent, on theguardian.com - British Museum and BBC team up to explore belief through objects - reports on the forthcoming exhibition Living With the Gods at the British Museum which will include a 30-part radio series hosted by the venue's ex-director Neil MacGregor. 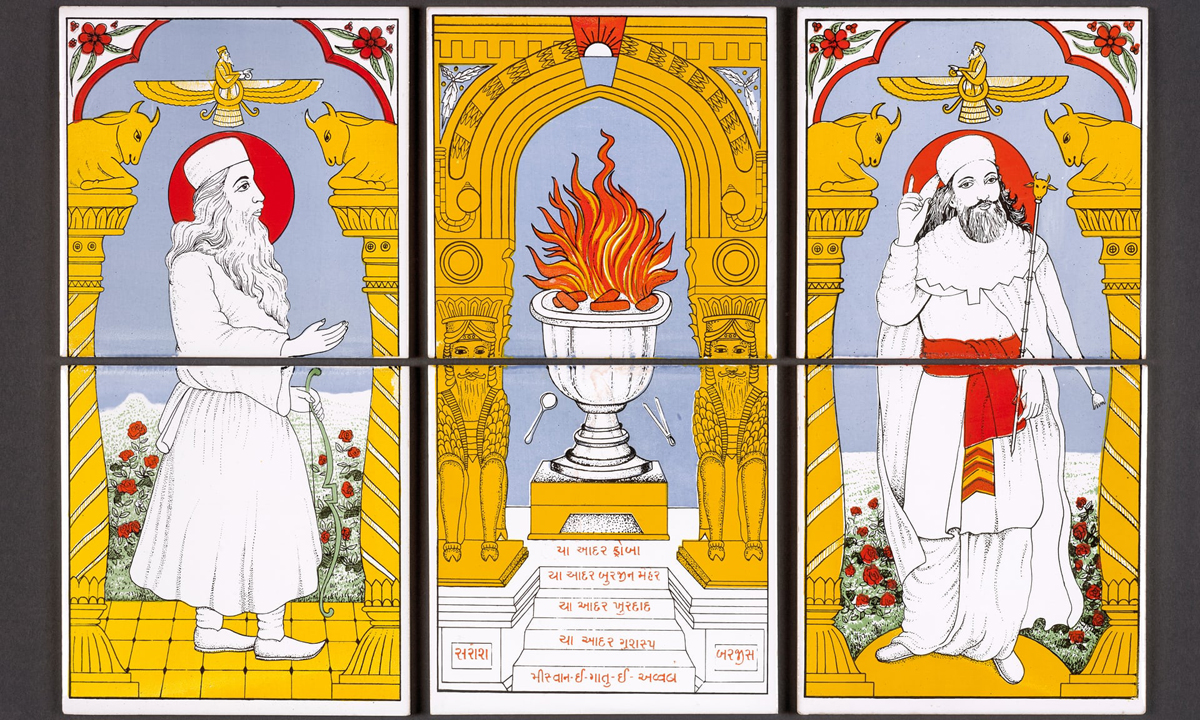 A set of Zoroastrian tiles used in a domestic Parsi shrine. Image: Trustees of the British Museum

Patterns of shared belief and ritual over 40,000 years, from the Ice Age to the present day, are to be explored.

Living With the Gods, presented by the former British Museum director Neil MacGregor, will air over six weeks, beginning this month, on BBC Radio 4. An exhibition of objects that form the core of the series will open on 2 November.

MacGregor - an acclaimed art historian, curator and devout Christian - examines shared rituals, festivals, pilgrimages and sacrifices and the relationship between belief, society and politics. He states that "Questions of faith have, in recent decades, moved to the centre of the global political stage - an unexpected return to a centuries-old pattern." Using objects from the British Museum and talking to experts, MacGregor looks at the connections between structures of belief and structures of society.

Speaking at the launch of the series, he said it was about "belonging and believing. It's not about individual belief, it's about how patterns of belief have shaped societies and given societies coherence. It's about what we do on our own and what we do together, and how communities are shaped by rituals organised around an idea."

The first object examined in the series is a statue found in a cave in south Germany, dating back 40,000 years, with the head of a lion and the body of a man, created from a mammoth's tusk.

Jill Cook, a pre-history expert at the British Museum, said the figure was a masterpiece. "It is hugely original, it shows great technical virtuosity, and it has incredible spiritual presence. It looks at you, it watches you. It's a very powerful object."

People at the time were "living on the edge. What they most need to do is find food and keep warm and yet they allow someone amongst them to spend over 400 hours making a sculpture. Clearly, people are trying to come to terms with their environment, to reshape or transcend their environment. They're thinking, believing, trying to transcend the daily grind of keeping their lives together."

The object, Cook said, was "the oldest known evidence we have of religious belief within our own species. It's a wonderful place to start a journey not just of how we believe but that we believe. There is no known society across the world that does not have belief at its base."

The first episode of Living With the Gods will be broadcast on 23 October at 9.45am and 7.45pm. The exhibition will run from 2 November until 8 April 2018.

Read more:
Living With the Gods at the British Museum