Standing on the Walls of Time: Ancient Art of Utah's Cliffs and Canyons

Standing on the Walls of Time: Ancient Art of Utah's Cliffs and Canyons

In western culture, rock art has traditionally been viewed as 'primitive' and properly belonging in the purview of anthropologists rather than art scholars and critics. This volume, featuring previously unpublished photographs of Utah's magnificent rock art by long-time rock art researcher Layne Miller and essays by former Utah state archaeologist Kevin Jones, views rock art through a different lens.

Miller's photographs include many rare and relatively unknown panels and represent a lifetime of work by someone intimately familiar with the Colorado Plateau. The photos highlight the astonishing variety of rock art as well as the variability within traditions and time periods. Jones's essays furnish general information about previous Colorado Plateau cultures and shine a light on rock art as art. The book emphasizes the exquisite artistry of these ancient works and their capacity to reach through the ages to envelop and inspire viewers.

Kevin T. Jones is the former state archaeologist of Utah. He is the author of The Shrinking Jungle, an anthropological novel set among the Aché hunter-gatherers of Paraguay, among whom Jones lived and studied in the early 1980s.

Layne Miller is a retired journalist, a lifelong resident of eastern Utah, and a long-time aficionado of the rock art of the region.

The author reminds us at the outset that prior to Europeans, 'the citizens of this land hunted, gathered, farmed, raised families, fought, played, sang, danced, prayed and expressed some of their most personal and sacred thoughts through images on stone for all to see. Today only a scant record of those rich lives exists, but what a remarkable legacy the artists of the ancient canyons have left behind.'

That is the premise, and this is the caveat: 'I am not going to try to interpret the artists' meanings or symbols. In fact, I am strongly opposed to that approach'. Instead the author invites us to observe these magnificent images of rock art (and archaeological sites and landscapes) on an emotional and personal level rather than an intellectual and collective level.

He goes on to say that 'When someone took tools and paints and created an image on the cliff face of a remote canyon alongside a great, flowing river, little thought was given to how the work might be interpreted a thousand years hence.'

How refreshing. And how true of rock art around the world where 'these sentinels who have guarded this canyon for over a thousand years are mute.'

So the context is set - 'Utah: the Rock Art State' - and true enough, deep within the natural setting there are sublime works of art. Jones reminds us why this art is so critical; 'the most important ways people identify themselves, those items of their behaviour that distinguish them from others, are not generally expressed in the concrete objects that may be accessible to archaeologists......Archaeologists cannot dig up language....We cannot dig up beliefs....We cannot dig up stories. What are we left with?' 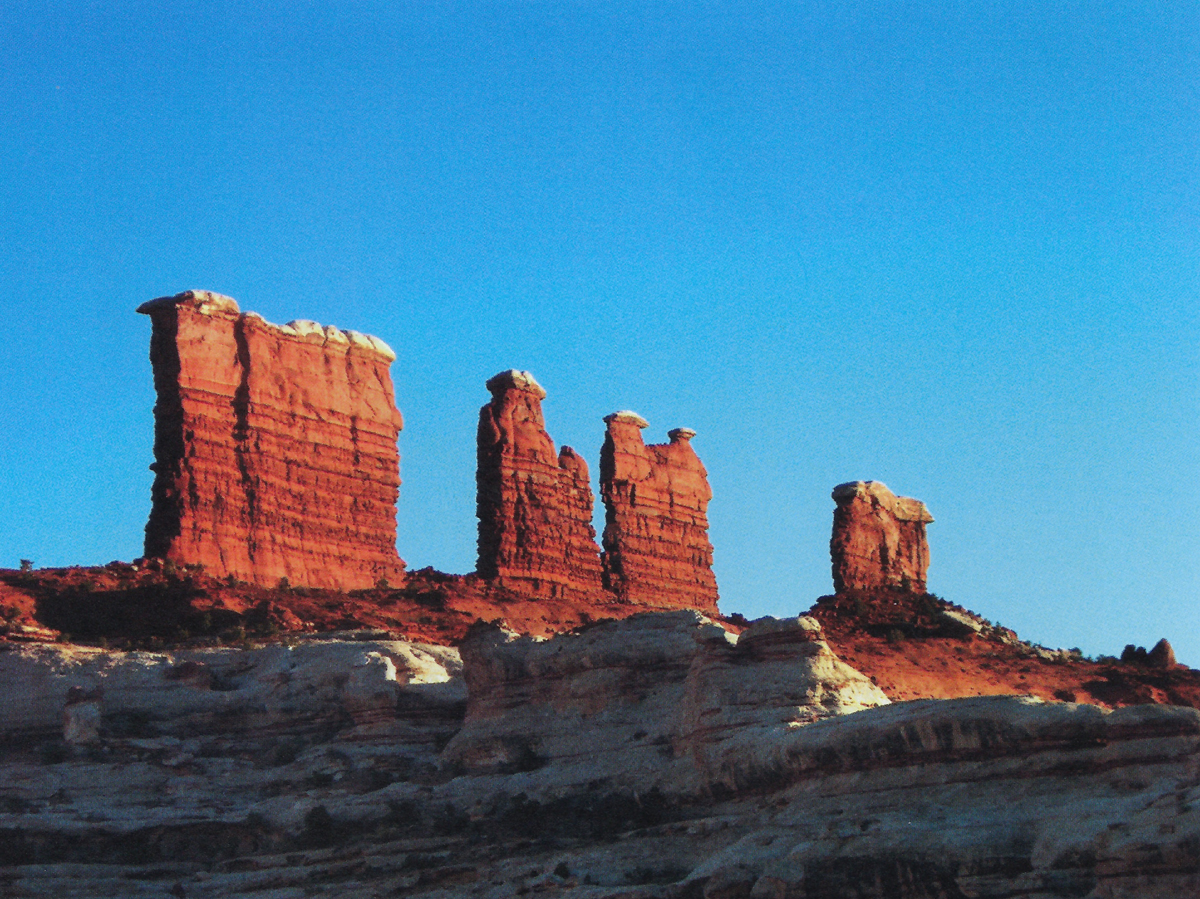 The formation known as the Chocolate Drops, which seem to be the guardians of the Maze District of Canyonlands National Park. Image: Layne Miller.

Jones takes us through the chronology and styles of art - from the earliest Paleo-Indian Period to the latest Late Prehistoric/Historic Period - in a lucid manner that is never dull and always with measured passion.

He gathers our thoughts towards the end of this publication with a warning about the implications of the demise of the rock art. Yet he does so in a positive manner; 'Where else can we learn about how climate change affected a thriving culture? Where else do traces of the past beckon us to investigate, examine, see?' Moreover, the author lays out six fundamental and achievable steps for us all to take in order to 'protect these messages from the past.'

Add to Cart:
Standing on the Walls of Time:
Ancient Art of Utah's Cliffs and Canyons