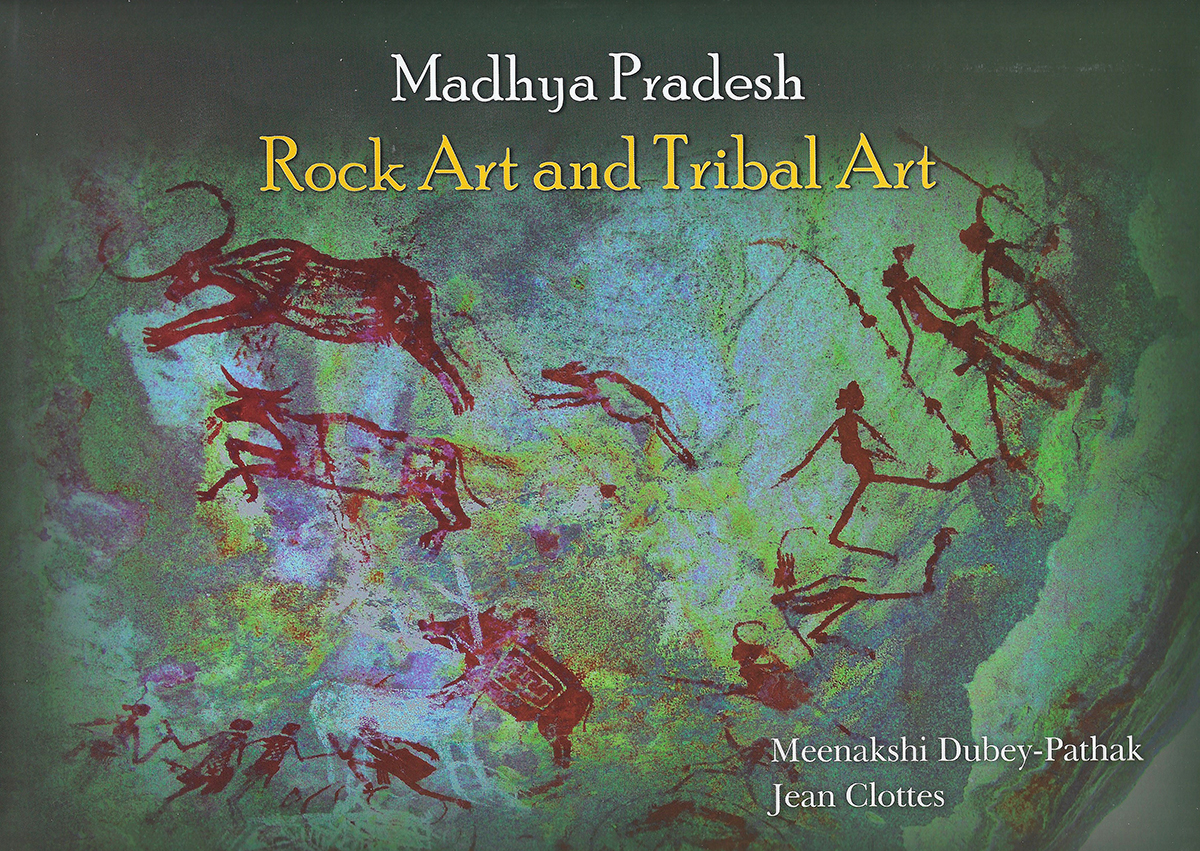 Among the numerous cultural manifestations in India, rock art is one of the most magnificent expression of the creativity of our ancestors. Indian rock art is mostly known from the Bhimbetka painted shelters in Madhya Pradesh which were designated a UNESCO World Heritage site in 2003. Madhya Pradesh also is the Indian State with most rock art sites, probably over two thousand. The present volume aims to make the general public aware of these cultural riches. The cultural traditions of the inhabitants of the villages adjacent to the sites bear a strong resemblance to those represented in the rock paintings. On visiting the sites, one becomes aware of the ongoing ceremonial practices being performed by the tribal villagers, for whom the age-old rock art is still alive. The painted shelters are thus places of power and divinity from where they expect to get their wishes fulfilled. The present work attempts to document these traditional beliefs about the sites and the art, including different forms of tribal art, before they are lost forever. Since the Mesolithic and perhaps before, rock shelters have thus been perceived as numinous places where one could get in touch with supernatural powers – whatever names and attributes they were given – in order to further one’s wishes. The authors’ own wish would be that the values of rock art sites be recognised and more efforts be made to manage and protect them. May this book contribute to it! 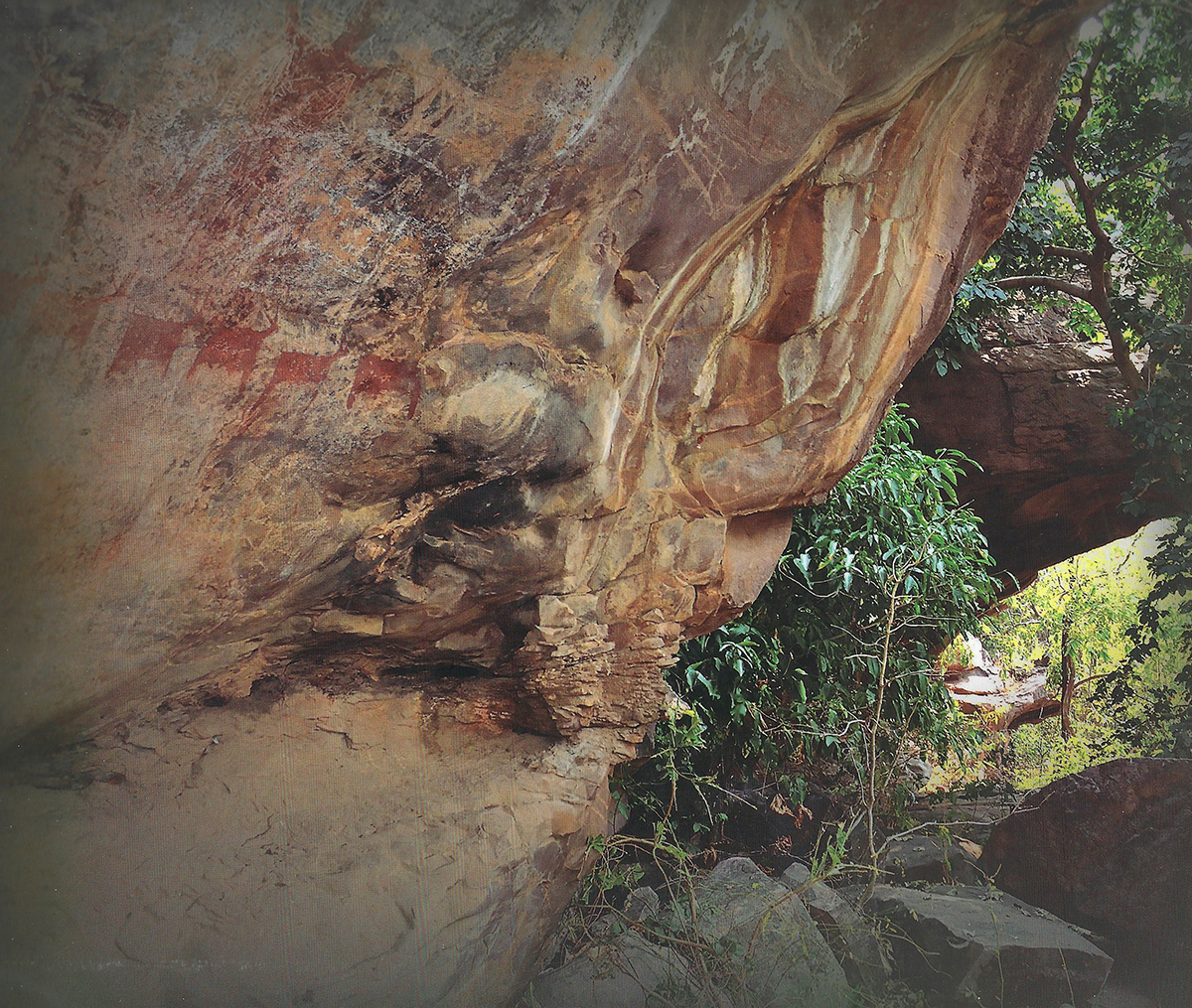 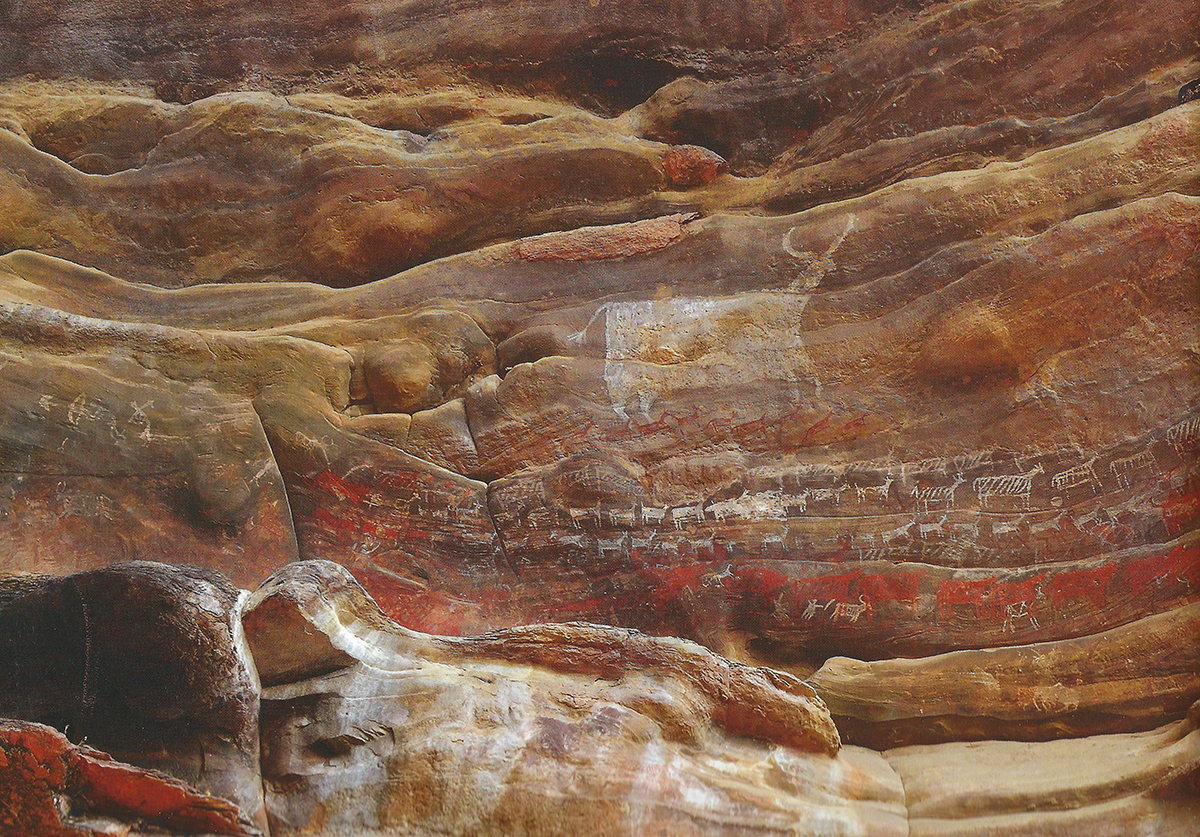 This new publication represents another excellent collaboration between Dr Meenakshi Dubey-Pathak and Dr Jean Clottes, bringing us a greater understanding of both the rich variety and extensive chronology - from the end of the Palaeolithic to modern times - of the rock art of Madhya Pradesh as well as an idea of the sheer scale of it. The publication is a reflection of the amount of field work carried out by these two rock art experts, independently and collaboratively, and they openly admit at the outset that there were far more rock art sites spread across this State than first thought. This realisation was due to two reasons: firstly, there simply has not been enough research and field work, and secondly, the extensive use of DStretch has revealed rock art that would have gone unseen. 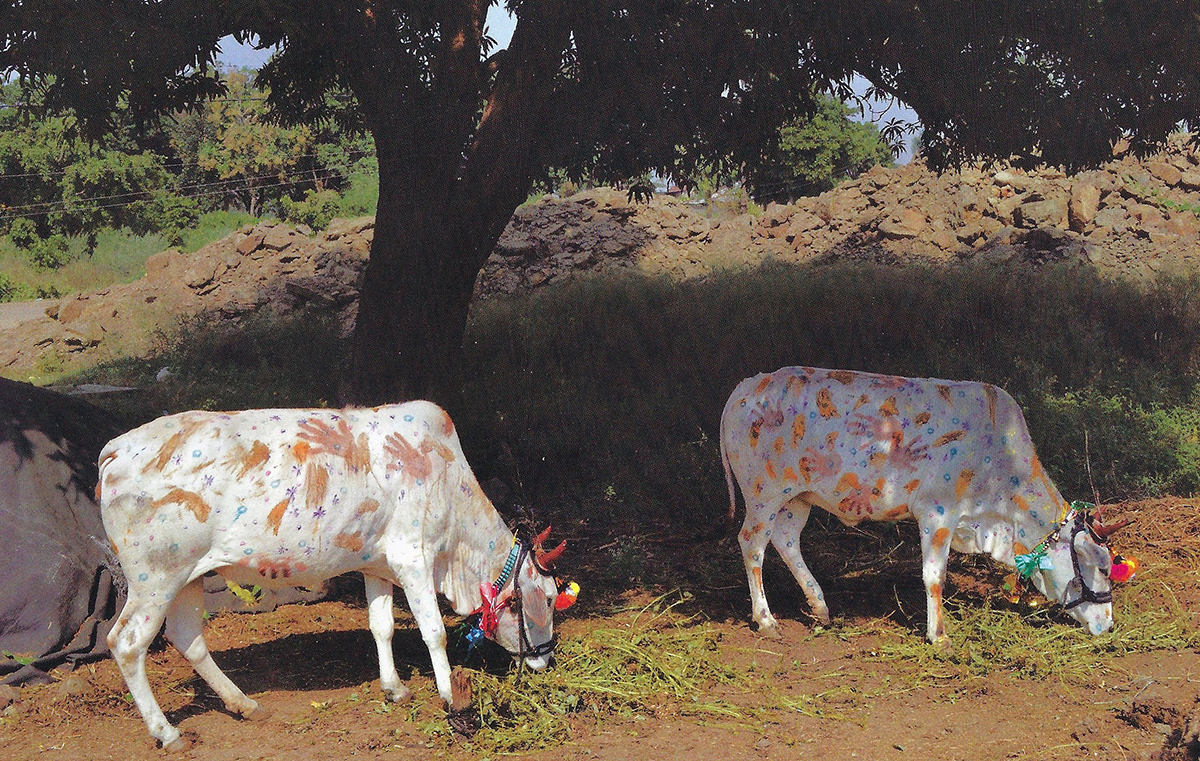 Why Madhya Pradesh? Because for years, with talk of Indian rock art Bhimbetka always (and for obvious reasons) comes to the fore. This publication, however, shines light on rock art in the rest of State. The hills of Madhya Pradesh have an abundance of shelters with impressive overhangs, most suitable for habitation and therefore ceremonial behaviour, which perhaps explains why there are quite so many rock art sites. The publication - the embodiment of extensive and numerous surveys - reveals that the creation of rock art depended on the availability of certain rocks rather than on preconceived ideas about the landscape. Then, once chosen, the site became sacred and powerful. 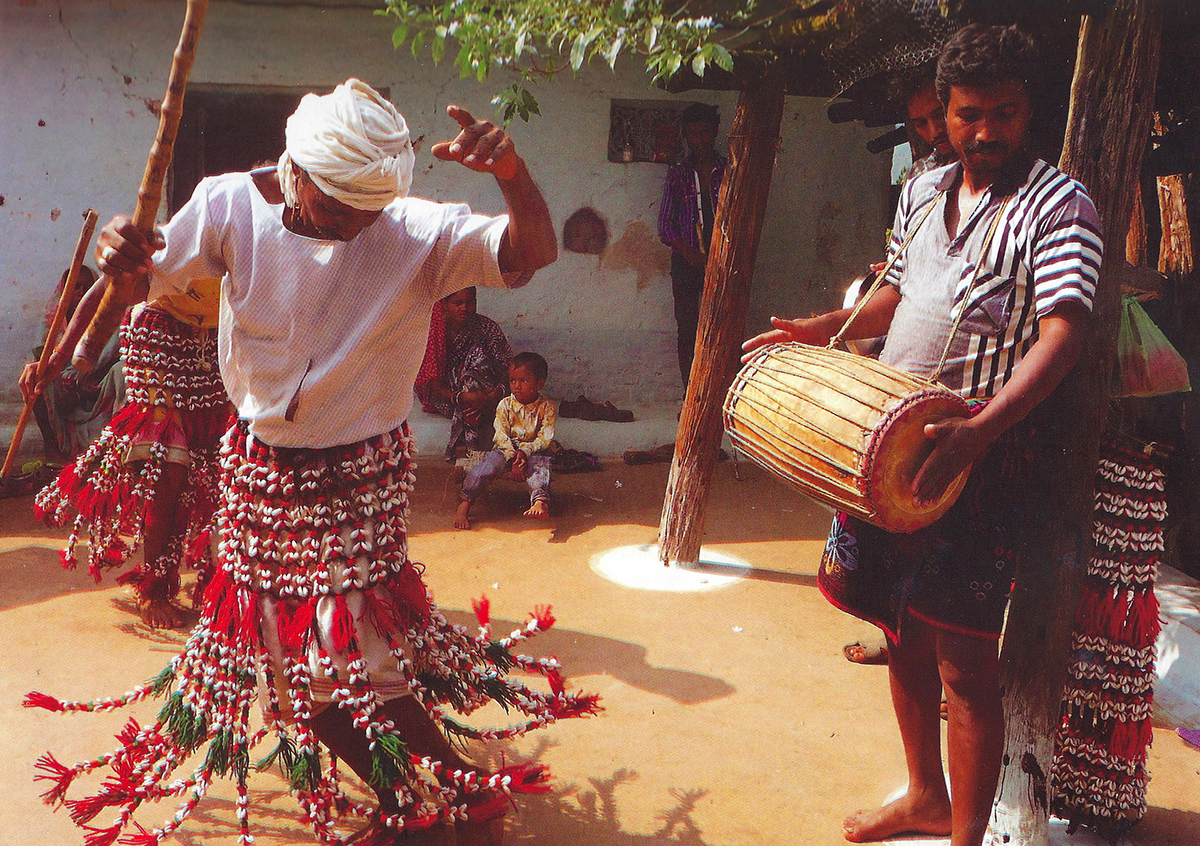 Having surveyed the State and visited so many rock art sites, the authors now present an overall view; Rock Art and Tribal Art: Madhya Pradesh is an invitation, if you like, to encourage further in-depth research and documentation, as well as motivate the general public - non-specialists - to become more aware of India's great cultural heritage.

The publication is laid out logically, commencing with a geographic, ecologic and demographic context, followed by a list of the rock art sites visited in all corners of the State. The main characteristics of the rock art - the location, the techniques, the subjects represented and the chronology - are noted, before describing how the rock art sites have been adopted for modern use. The final chapter posits that there appears to be a cultural and artistic link between rock art and tribal art, where elements of each may help in the beginning of an understanding of the other. Common themes and the repetition of motifs and symbols - today, on cows and on houses, for example - may be the consequence of shared beliefs, although the authors are keen to emphasize the danger of ethnological comparisons, quoting André Leroi-Gourhan who claimed "I always felt that ethnological comparisons were dangerous, but they are unavoidable." What at first appears to be a gold mine can turn out to be a mine field.

Along with impressive images of both the sites and the rock art, Rock Art and Tribal Art: Madhya Pradesh also presents many stories recorded by the authors about the various forms of the supernatural value and power of the rock art and the rock art sites, and how local tribal people still interact with both. But the stories come with a warning; whilst so much has been rediscovered and documented, completing the task - in Madhya Pradesh alone - is in fact a race against time.

This is due to the vandalism of the art (usually inadvertently by unaware visitors), natural deterioration over time and finally the gradual but unavoidable demise of the ethnological and traditional understanding of the rock art that has been passed down from generation to generation. The title of this publication highlights the cultural, artistic and ritual thread running between the past and the present. However, where rock art sites are adopted by more recent festivals - as is the case at Nagdwari - the authors note that 'one can barely see the remains of the paintings that for the most part have disappeared under modern inscriptions. The site is basically dead.' At Chitrashala - 'House of Paintings' - the shelter now has no visible rock paintings. Rather like Pearl Harbour on the island of Oahu, Hawaii; no pearls there any longer. Clearly, regarding the preservation of rock art in India the agencies at work must increase their efforts to educate one and all sooner than later.

Whilst the publication refers to the dangers of modern use of rock art sites in Madhya Pradesh, the other side of the coin is less inauspicious. Indeed, for me it represents one of the most interesting aspects of rock art, and one that can be observed in only a few parts of the world today: an aspect indicating that the site is still potent rather than a dusty relic. For the local tribes it seems the paintings - whatever their origin (because explanations always varied) - the paintings were felt to be powerful and able to grant them their wishes. 'Long live' this potency, but the caveat must be 'preservation.'