An article by Robin McKie, Science Editor on theguardian.com - Take a tusk, drill holes, weave a rope – and change the course of history - reports on the discovery of the tool our stone-age ancestors used to manufacture twine. This was a milestone in technological development. 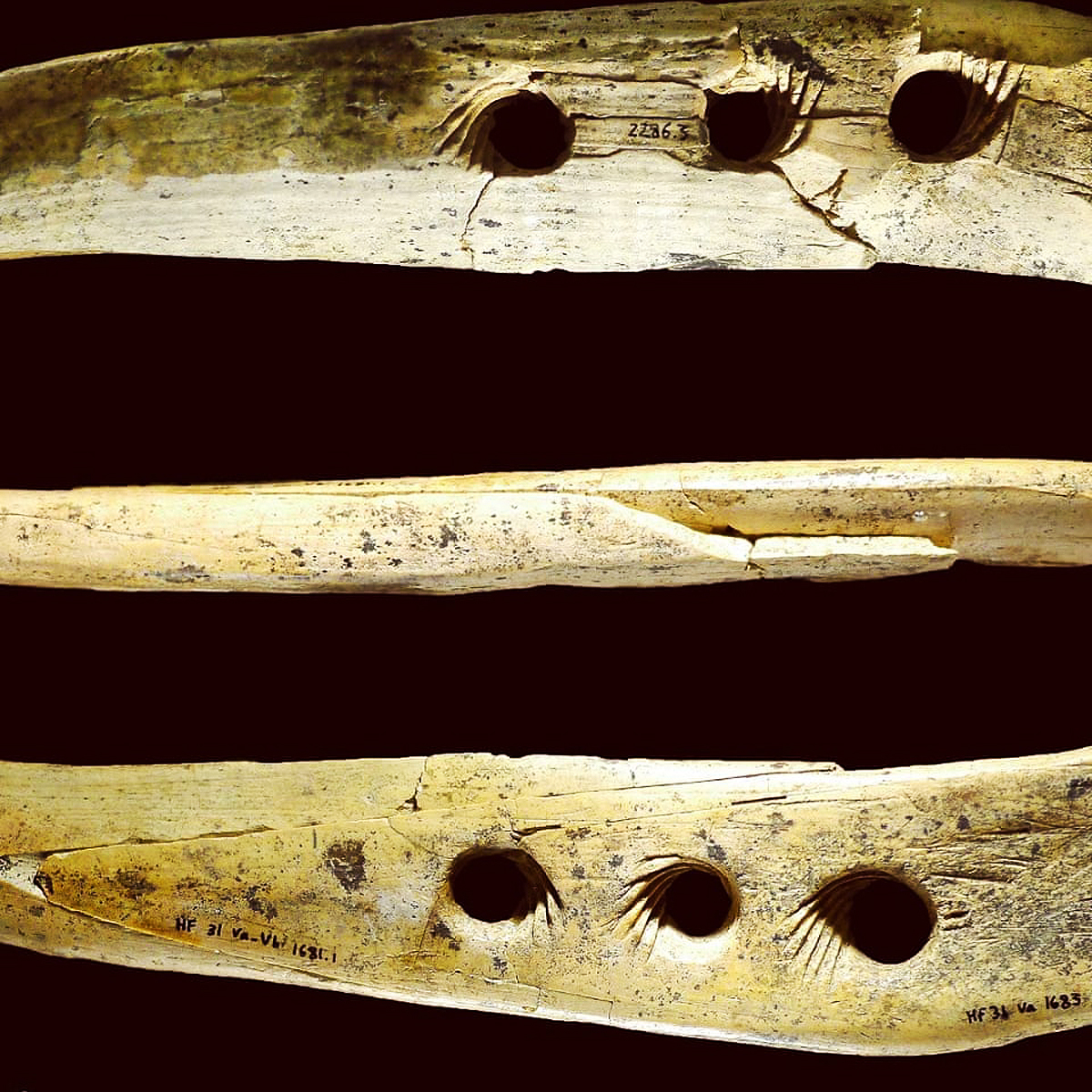 The fragments found at Hohle Fels cave in Germany that scientists now recognise as a rope-making tool from 40,000 years ago. Photograph: University of Tübingen

Some forty thousand years ago, a stone-age toolmaker carved a curious instrument from mammoth tusk. Twenty centimetres long, the ivory strip has four holes drilled in it, each lined with precisely cut spiral incisions. The purpose of this device was unclear when it was discovered in Hohle Fels cave in south-western Germany several years ago. Now scientists have concluded that it is the earliest known instrument for making rope; its impact would have been revolutionary.

Our stone-age ancestors would have been able to feed plant fibres through the instrument’s four holes and by twisting it create strong ropes and twines. The grooves round the holes would have helped keep the plant fibres in place. The resulting ropes could then have been used to make fishing nets, snares and traps, bows and arrows, clothing and containers for carrying food. Heavy objects, such as sleds, could now be hauled on ropes while spear points could be lashed to poles. A technological milestone had been reached in our development.

Meanwhile in Britain, scientists believe similar devices, found in Gough’s cave in Cheddar Gorge, Somerset, show that ropes were also being manufactured and used in Britain as the last ice age came to an end. Made of reindeer antler, these devices also feature holes with spiral incisions and appear to have been used to manipulate ropes. Prof Chris Stringer of the Natural History Museum in London, who has studied the Gough cave instruments, explains that “A lot of attention has been given to the importance of our abilities to make specialised stone tools and to use fire as being key elements of the prehistoric success of Homo sapiens. But in many ways, the ability to make string and rope out of animal tissue and plant fibres was every bit as revolutionary in its impact at the time. It opened up all sorts of new avenues for exploiting the natural world, from the weaving of baskets to the construction of bows and arrows.”

He added that the use of ropes to make fire-bows or fire drills – used to generate friction in order to start fires – would also have become possible, while twine could be used to lash together tents and sleds. “These sleds could have been hauled by humans or dogs, which humans were then domesticating from the descendants of wolves.”

The Cheddar Gorge devices are thought to be about 15,000 years old, younger than the instruments found at Hohle Fels cave. However, their existence – in one of the most north-westerly outposts in Europe to have been inhabited by Homo sapiens in the early stone age – indicates rope-making had already become a vitally important human activity.

“Mysterious objects made of reindeer antler and drilled with grooved holes had been found in Gough’s cave which, we now know, was used by prehistoric people,” said Stringer. “These devices were called batons and were originally thought to have been carried by chiefs as badges of rank. However, they had holes with spirals round them and we now realise they must have been used to make or manipulate ropes.”

Similar devices have been found at many other sites once occupied by ancient humans in Europe, suggesting making and using rope had become widespread in the upper palaeolithic or late old stone age. The initial discovery was made by a team led by Nicholas Conard, director of the institute of archaeological sciences at Tübingen University. His excavations at Hohle Fels cave began in 2008 and have revealed finds that led to the site being given Unesco World Cultural Heritage status. One of the earliest musical instruments – a 35,000-year-old flute made of bone – was uncovered there, as was the earliest known undisputed example of figurative art, a small female figure, made of mammoth ivory and possibly worn as an amulet, and which is known as the Venus of Hohle Fels cave.