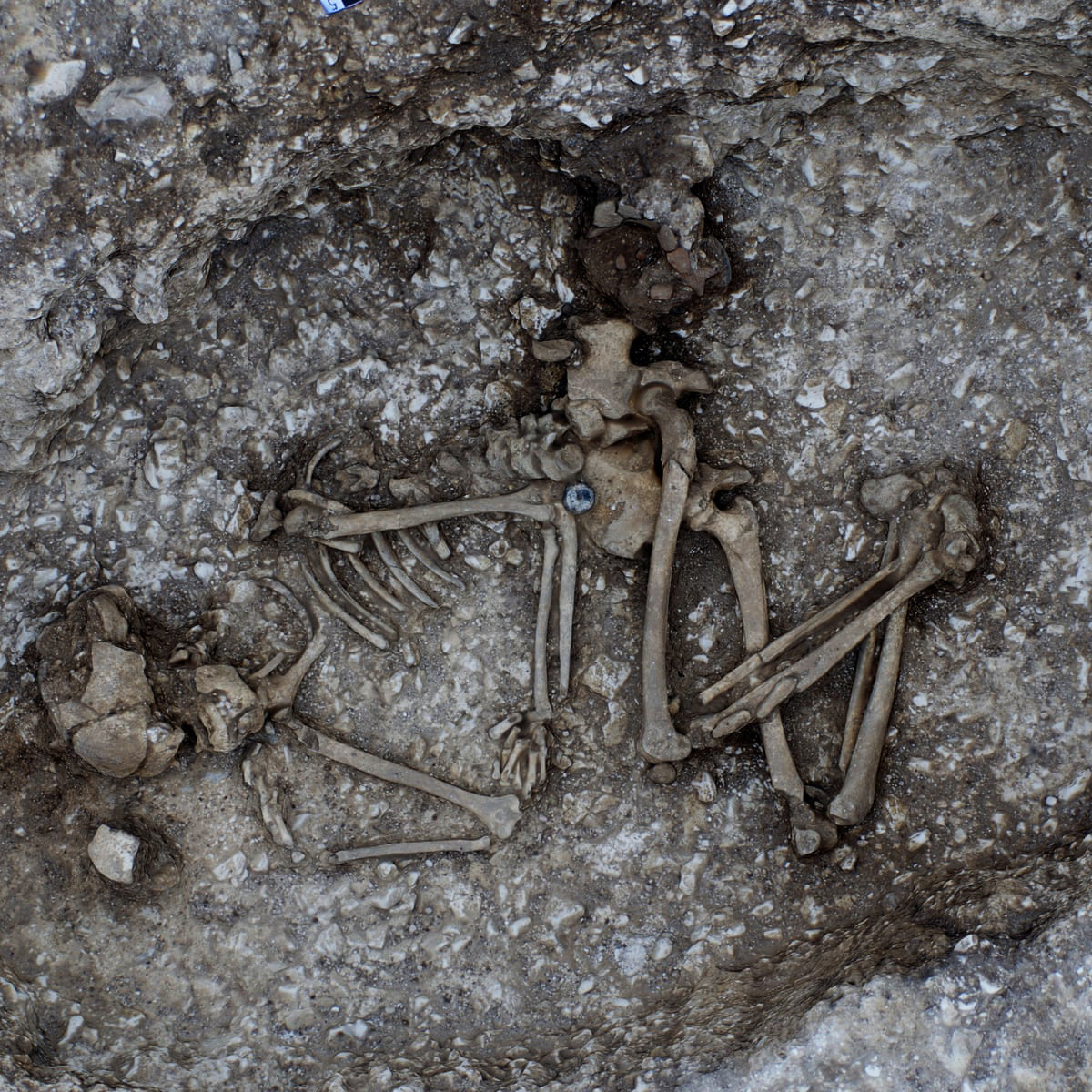 One of the two Beaker-period burials found near the site of the proposed Stonehenge road tunnel. Photograph: Wessex Archaeology

Bronze age graves, neolithic pottery and the vestiges of a mysterious C-shaped enclosure that might have been a prehistoric industrial area are among the finds unearthed by archaeologists who have carried out preliminary work on the site of the proposed new road tunnel at Stonehenge. Among the discoveries, a shale object that could have been part of a staff or club found in a 4,000-year-old grave. Nearby is the resting spot of a baby buried with a small, plain beaker. Ditches that flank the C-shaped enclosure contain burnt flint, suggesting a process such as metal or leatherworking was carried out there thousands of years ago.

The plan to drop the A303, which passes close to the stones, into a two-mile tunnel is hugely controversial, with many experts having said that carrying out such intrusive construction work would cause disastrous harm to one of the world’s most precious ancient landscapes and lead to the loss of hundreds of thousands of artefacts. A legal challenge was launched against the £1.7bn plan late last year. Highways England and Wessex Archaeology, which is leading the exploration of the tunnel corridor, said they were working on the project systematically and sensitively. 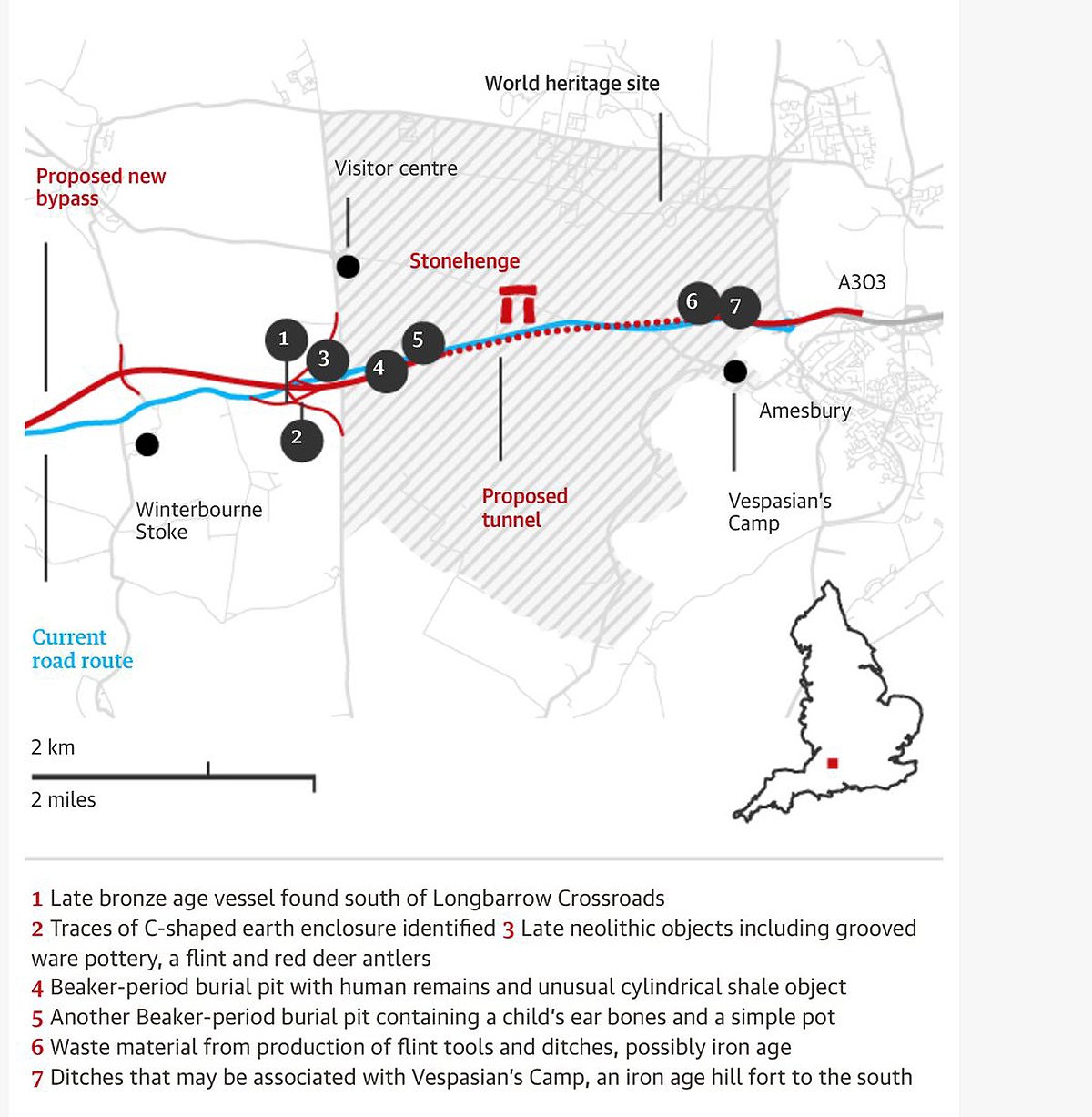 During this preliminary phase, Wessex experts have hand dug and sieved almost 1,800 test pits and excavated and recorded more than 400 trial trenches. The next phase of archaeological excavations will begin later this year, lasting approximately 18 months and involving up to 150 archaeologists. Construction work on the tunnel is due to start in 2023. Near the planned eastern portal of the tunnel, the archaeologists discovered large amounts of debitage – waste material from the manufacture of flint tools – and ditches that may date to the iron age and could be associated with Vespasian’s Camp, a hillfort to the south.

Close to the western end, two burials of Beaker people, who arrived in Britain in about 2,500BC, were found. One was an adult, buried in a crouched position with a pot or beaker. Also in the grave was a copper awl or fragment of a pin or needle and a small shale cylindrical object, of a type that is not believed to have been found before. Also found in the same area was a pit dating to the age of the Beaker people containing the tiny ear bones of a child and a very simple pot – a sign that this too was a grave. Usually Beaker pots are ornate but this one is plain, probably to reflect the age of the person who died. A little farther south, the C-shaped enclosure was found. Another find was a group of objects dating to the late neolithic period – when the stone circle was built – including grooved ware pottery, a flint and red deer antlers. For the time being the finds are in storage in Salisbury and will ultimately go on display in the city’s museum.

The team accepts that all road schemes have an impact on an area’s archaeology. Andy Crockett, A303 project director for Wessex Archaeology, said: “There isn’t one option that would allow zero impact on archaeological remains; that’s true of every development you can think of.” He said the trade-off was that the sight of cars and lorries trundling along the A303 close to the stones would vanish and two halves of the world heritage site now split by the road would be reunited. Highways England said the amount of survey work that had been carried out was unprecedented because of the significance of the site. David Bullock, A303 project manager for Highways England, said: “There has been a huge amount of investigations so that this route can be threaded through so as to disturb as little as possible.”