An article by Dalya Alberge on theguardian.com - Neanderthals helped create early human art, researcher says - reports on recent research which may indicate that the ability to think and create objects may not have been restricted to Homo sapiens. 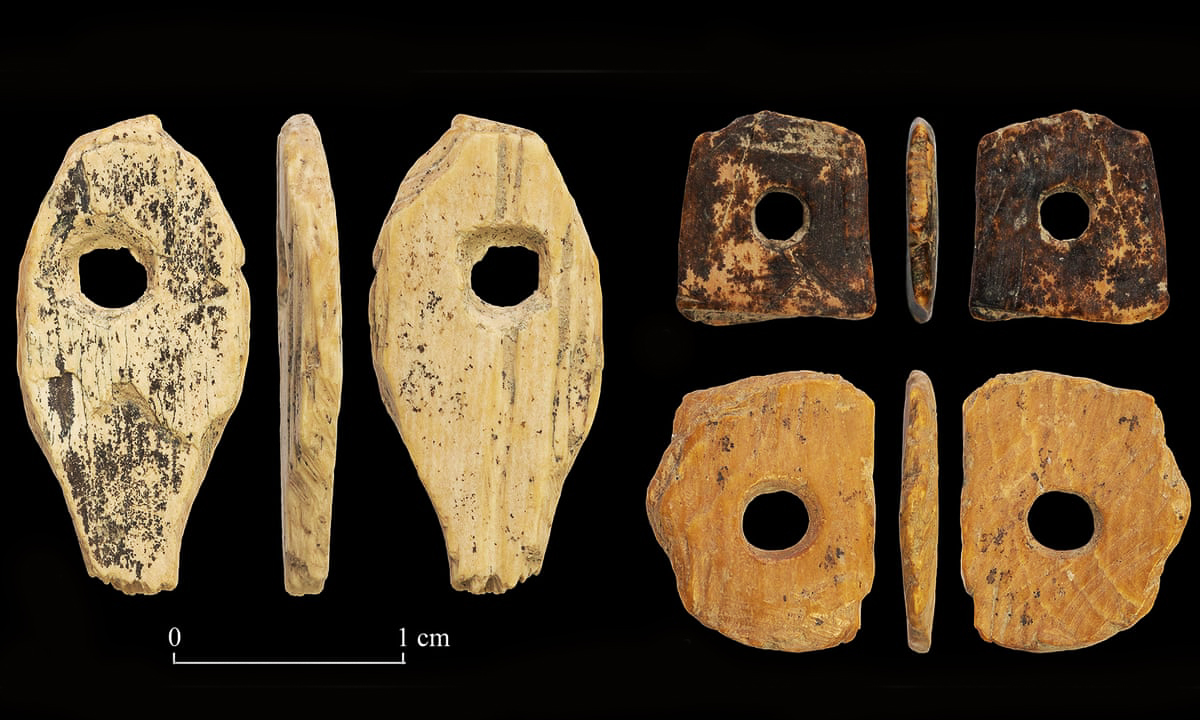 Denisovan ornaments made from mammoth tusks from Denisova Cave in Siberia. Image: SiberianRussian Academy of Sciences

When Neanderthals, Denisovans and homo sapiens encountered one another some 50,000 years ago, these archaic and modern humans not only interbred during the thousands of years in which they overlapped, but they exchanged ideas that led to a surge in creativity, according to Tom Higham, a professor of archaeological science at the University of Oxford.

He argues that their exchange explains “a proliferation of objects in the archaeological record”, such as perforated teeth and shell pendants, the use of pigments and colourants, decorated and incised bones, carved figurative art and cave painting: “Through the early 50,000s, up to around 38,000 to 40,000 years ago, we see a massive growth in these types of ornaments that we simply didn’t see before.”

Between 40,000 and 150,000 years ago, our cousins included the Neanderthals, Homo floresiensis, Homo luzonesis and the Denisovans. “Now it’s just us; there aren’t any other types of humans on the planet,” Higham explains. “We always thought that the origins of art and complex cognitive thought was the hallmark of modern humans. This was called the human revolution. The basis of this hypothesis, which came out in the 1970s, was that humans came out of Africa and brought with them a cognitive ability that no other types of humans – particularly Neanderthals – had. Now what we think is happening is that it’s not restricted to modern humans at all. If our groups were interbreeding, then cultural transfer – the exchange of ideas, thoughts and language – may well also have been happening. Humans are good at picking up new ideas.”

The latest research, which draws on recent findings by international scientists and archaeologists, will feature in Higham’s forthcoming book The World Before Us: How Science is Revealing a New Story of Our Human Origins to be published by Viking later in March. He writes that Earth was a primevally complicated place 50,000 years ago: “To borrow from the words of Tolkien, we should think of it as a veritable ‘Middle Earth’ in terms of the diversity of forms of the human family that existed at the time. There were five, six, or even more, different types of human present in various parts of the world.”

In the book, through the latest scientific and technological advances – including radiocarbon dating and ancient DNA analysis – Higham explores how we became the only humans on Earth and how our forebears lived – “and live on in our genes today”. He is a world expert in technology that is revolutionising what we know about previous human species. Archaeological and genetic discoveries are transforming our understanding of our ancestors.

Higham is among academics who have been working in Siberia, where a new type of human, the Denisovans, was discovered in a remote cave in 2010. From a finger bone fragment so tiny that it would previously have been unidentifiable, they were able to extract crucial DNA details that link them to people spread across a vast area of Eurasia, including south-east Asia. “Denisovans are closely related to Neanderthals and to us. As with Neanderthals, we interbred with them. People today, depending on where they are geographically, have a small amount – and, in some cases, big amounts – of Denisovan DNA. At the site of the Denisova cave, we’ve also uncovered evidence that intriguingly suggests that Denisovans too might have been involved in making personal ornaments and doing the kinds of things that hitherto we only thought were the exclusive preserve of us and later Neanderthals.”

That evidence includes rings and beads made out of mammoth tusks and ostrich eggshells. “Were these and the other ornaments made by both Denisovans and modern humans?” Higham asks. New research means that all sorts of artworks and decorative items that have been assumed to be linked to the earliest modern human could have been created by Neanderthals or Denisovans, in the absence of other evidence. Higham goes on to say: “The weight of evidence now suggests that if there was cultural transmission, it probably occurred in both directions, and that the earliest evidence for the beginnings of complex behaviour in Europe was prior to the widespread arrival of Homo sapiens.”