In the search for meaning, let's not lose sight of the artistry. 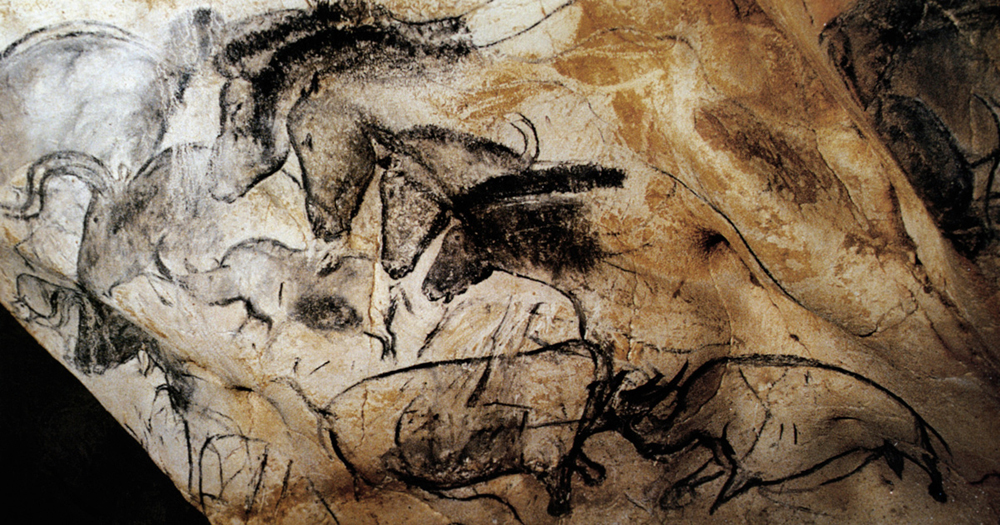 This panel of rock art in Chauvet is known as the Panel of the Horses, and it comprises some twenty animals. The Aurignacian charcoal drawings are considered to be one of the most outstanding scenes in Chauvet; there are many elements to it.

The scene with the rhinoceroses confronting each other can be seen nowhere else in Palaeolithic rock art. Face to face, and with horns crossed, they represent males fighting. The way the bodies have been drawn, especially the figure on the right which measures roughly 1 meter in length, emphasizes the power of the scene. It is thought they were drawn by the same artist as one composition, roughly 32,000 years ago.

This overall panel was a planned composition, because the surface of the wall was prepared by scraping. The first animals to be drawn were two rhinoceroses, then the stag and two mammoths, followed by the two rhinoceroses facing each other, then several aurochs on the left of the panel, followed by the heads of the four horses - the space had been reserved for them. This demonstrates an awareness of creation from the margins to the centre of the panel. Notice also the diagonal axis of the drawn panel, marked by the alignment of the horse muzzles, in accordance with the nature and orientation of the stone wall itself.

For the horses, the first one was the one on the left, proceeding down to the final one on the right. Again, these are thought to have been drawn by the same artist; they share a likeness as well as the fact that the artistic effect gained from mixing the charcoal with the surface clay produced the same colours and hues. Once completed, the artist highlighted the four horses by scraping the outer edges of the profiles.

And beneath all of the drawings are the bear clawmarks.