Hand Stencils in the Forest of Korba, Chhattisgarh, India.

Touching the rock or imprinting the hands on the wall is the oldest tradition and still going on in India. Probably came from some important beliefs. Hand stencils are so common around the world over a time of 35,000 years and they are associated with many hypotheses and meanings to get connected with nature or environment.

Mostly these hand stencils are printed on a higher side of the shelter wall. Maybe they used a big rock to stand on and make those prints and then, over a period of time, that rock fell off or they may also have climbed to use the highest wall to imprint their hands. Left hand stencils being more numerous than right ones, possibly they used their right hand to hold the colour. Making solo stencils in the upper side cavity of a shelter or in niches is common worldwide. It could be a method of communication.

The Phutka hills contain all the rock art sites with hand stencils, in their surrounding areas. These stencils are probably more than 10,000 years old. I have not seen any hand stencil in Mesolithic times or later periods in India. These hands are drawn on sandstone rocks. These sacred sites were well known to the local villagers, who are residing in the forest area. From time to time these tribes worship these sites with offerings, as they believe that their local gods and goddesses reside there. 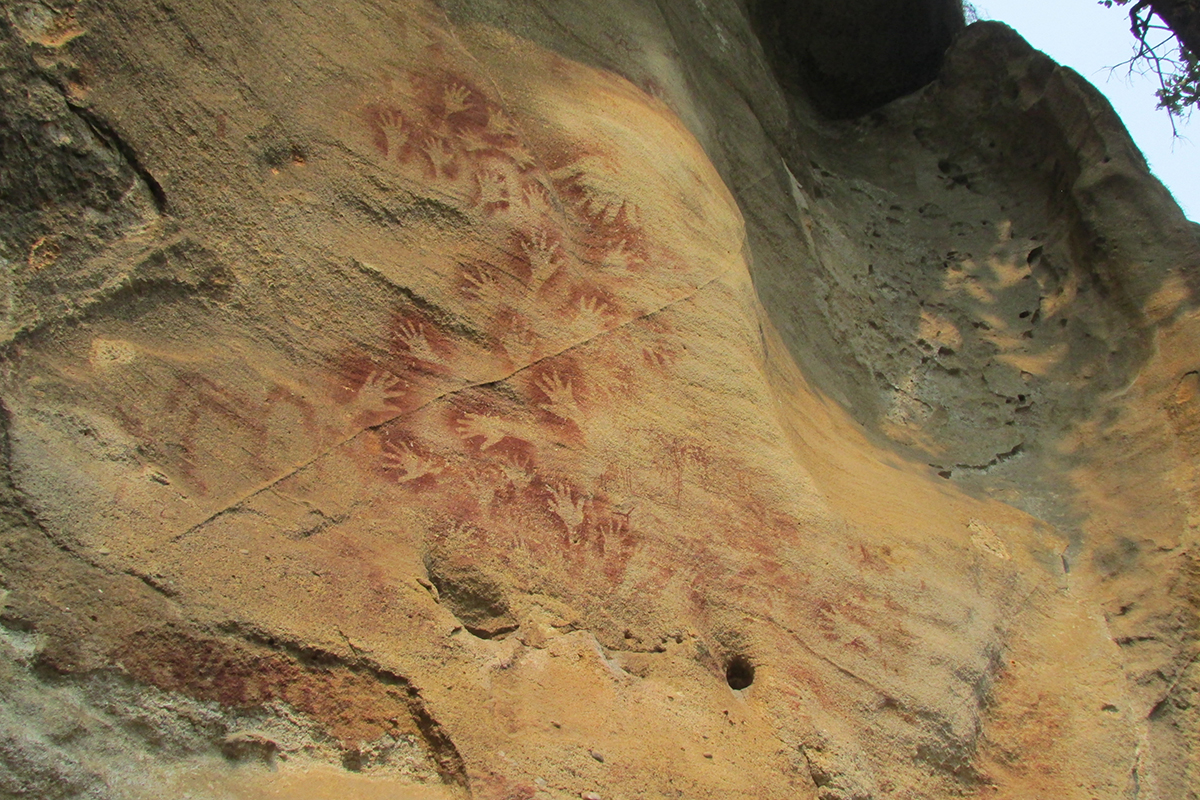 Chhatibahar village, the shelter Likhamara. It is a 28m long shelter. The choice of the location of the site seems to have been quite selective. Its hands can be seen from a distance and while climbing the hill one can spot those sacred hands easily.

The Likhamara site is dedicated to hand stencils only, so hands have superimposed for age and hundreds of negative hands can be seen at this biggest site. A very few geometric signs and small bird-like figures and turtles have been painted on the top of the hands. At this site hand stencils or negative hands are on their own, or clustered in different groups of left and right hands. A couple of them are missing fingers. Hand stencils are dark red and black. Some are printed very high, on the ceiling.

On the top part of the upper wall, many small hands (Fig.1 & 2) can be seen, at least sixty-six hand stencils painted in a long vertical group, children and adult hands. Some hand stencils are superimposed with red geometric signs and bird-like figures. All the red and black hand stencils are shown with their wrist and a half of the arm. 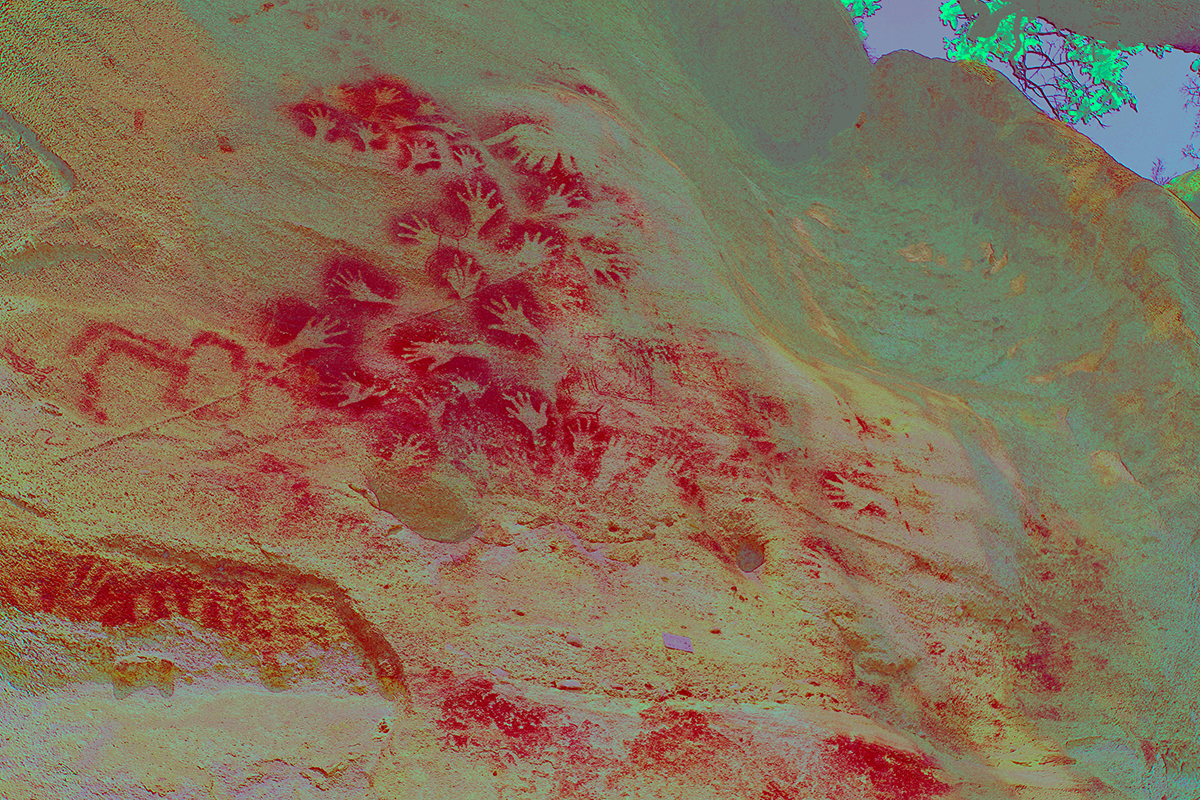 According to the Gond tribes, their ancestor souls reside inside the rectangular or any geometric signs (MDP &JC 2017). Turtle is also their god. According to their story, turtle saved their Budhadeo from drowning in the flood (MDP & JC 2020). The first crop of Paddy or Dhan (new rice) as an offering to the gods is an old tradition for the local tribes. Without offering to their local gods and ancestors, nobody would eat a new crop.

The rest were not well defined but they overlapped with hundreds of stencils, particularly on the lower part of the left side wall. Half of the painted part is already chipped out. Also, the lower wall has late period, small size sketchy animals like cervids and horse figures.

Aretera village has two sites: 1.Ramel Pahar. Site is not far from the village but located on a very steep hill. It is a huge rock without a good overhang. Because of that the sandstone rock suffered heavy damage, as the direct sun light chipped the rocks into pieces and so rock art images have been vanishing faster. The whole middle part of the shelter wall was thickly painted with hundreds of hand stencils and some geometric signs painted on top of the hands. Only ten to fifteen stencils are clearly visible. We see stencils and some geometric signs. These geometric signs are always connected with ancestors (MDP & Clottes 2017). Most are chipping off due to weathering effects.

2.Hathamada. (Printed Hands). To reach this site we crossed the river. It has many stencils mostly superimposed and eroded due to direct facing sun and wind. Still many hand stencils are visible. The site is only known for its hands, painted on the middle and lower part of the shelter wall. There are adults and children hand stencils in red. Some are shown with half their arms. Interestingly, one left hand stencil is drawn with an arm, showing something which has been tied around the wrist in a kind of band. Mostly, these stencils are in groups or in a row. Single left stencil is drawn in niches. A Pair of hands cross from each other's wrist.

In this area this is the only site which has got many handprints. Some are overlapping hand stencils. Local tribe Pahari Korba once in a year perform a ritual not far from the site and sacrifice goat to the god who resides in this site. So, he should not trouble them.

Sonari village: Hatha Jodi Mada (Printed Hands in Pair. The site is not so big but it shows many hand stencils, more than one hundred made with dark red and black. Upper part images are clearly visible. Sometimes hands are superimposed. On the lower wall, hands are not very visible but still one can make them out. The extreme left side of the wall has at least forty hand stencils in three groups. One left hand stencil is shown without its little finger and most have arms.

The middle rock wall has at least twenty hand stencils. On the upper side two left and one right (Fig.4) are very clear. On the left lower side one left and two others overlap each other. Four connected cavities also have single hands but they are not as visible.

The left part of the right side of the wall is full of natural cup marks and holes. Hands are not as visible on top of those rough surfaces but many are there still. The extreme right wall has twelve more hand stencils. Some more hands are in a group. On the same wall's lower side there are two hands crossing each other from the wrist. The site is indeed fully dedicated to the hands. It is sacred and 'worshipped' by the local villagers. 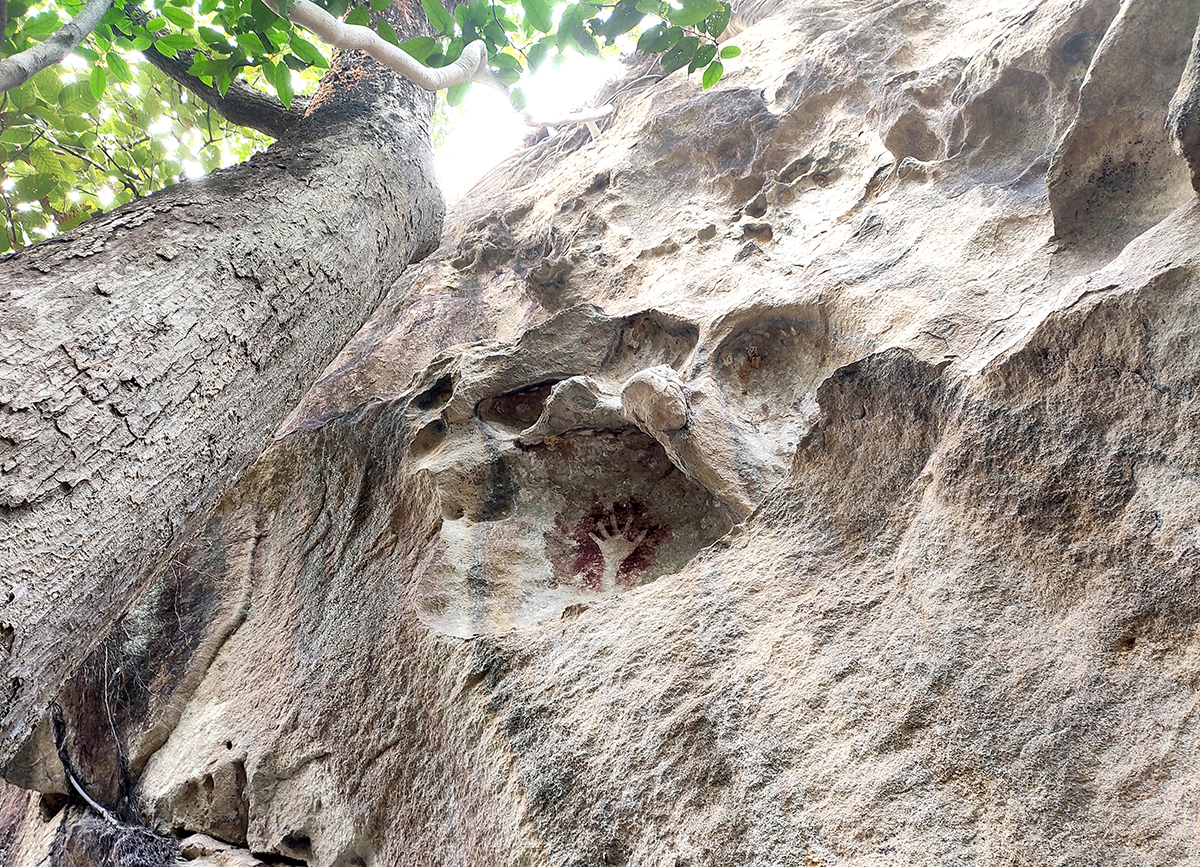 Hardi Mahua village: The shelter is known as Rani Pahad. (Local Goddess place). To reach this site we crossed the river. Many hand stencils are printed on the right, left and middle part on the vertical wall. The shelter is almost without an overhang. The site is dedicated to hands only. But its surface is badly eroded due to natural erosion. Its art is chipping out due to directly facing the sun.

On the extreme right wall, a single hand stencil (Fig.5) is clearly visible on the top cavity. A dozen hands are drawn on the cavity wall, located on the higher side of the left wall. Only five hands are clearly visible. Most of the hands?are superimposed. Sometimes a group of stencils has arms well designed in a shape.

Local tribes (Gonds and Pahari Korba) are still worshiping this site and believe their local goddess Rani Dai lives here and all the stencils belong to her. If they don't give offerings, their crops will get damaged by animals or nature. An old Gond man has been coming here from his childhood to worship the site along with his grandparents. Now his son comes with him to perform a ritual during rice crop cutting. They offer the first rice crop to Rani mai. Because they believe their goddess Rani mai lives there. All those hand stencils belong to her.

As far as gender and age are concerned, these hand stencils were made by all humans of different age groups. Mainly in dark red and rarely in black. Sometimes with arms or without arms. I recorded all those sites, located in dense and remote forests with wild life. On the invitation and with the support of the Forest Department, I was able to visit those sites. Soon these sites get protected by the Bio Diversity Board of Chhattisgarh. 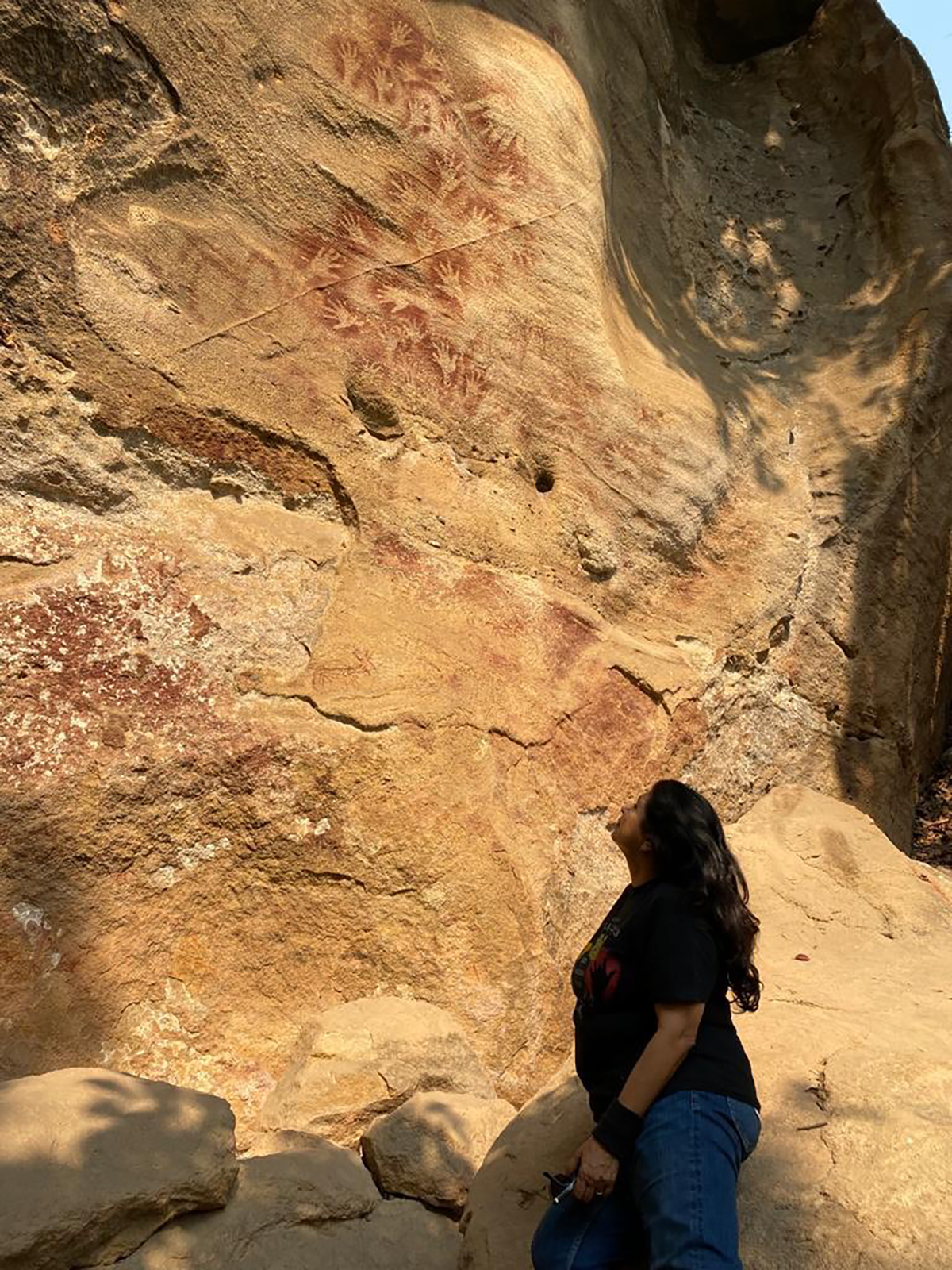 As I said and to sum up, These rock art sites are well known to the local villagers (Pahari Korba tribes) who are residing in the forest area. According to them their local gods and goddesses reside there and they have stories associated with particular sites.

In Chhattisgarh state still local tribes make handprints out of rice and turmeric paste during the Janamashtmi festival in the month of August.

All the images belong to Meenakshi Dubey-Pathak.