An article by Hugo Rikard-Bell on abc.net.au - Ancient Utyetye rock art protected from nesting swallows thanks to Ltyentye Apurte rangers - reports on the collaborative rock art site management at Utyetye in Central Australia. 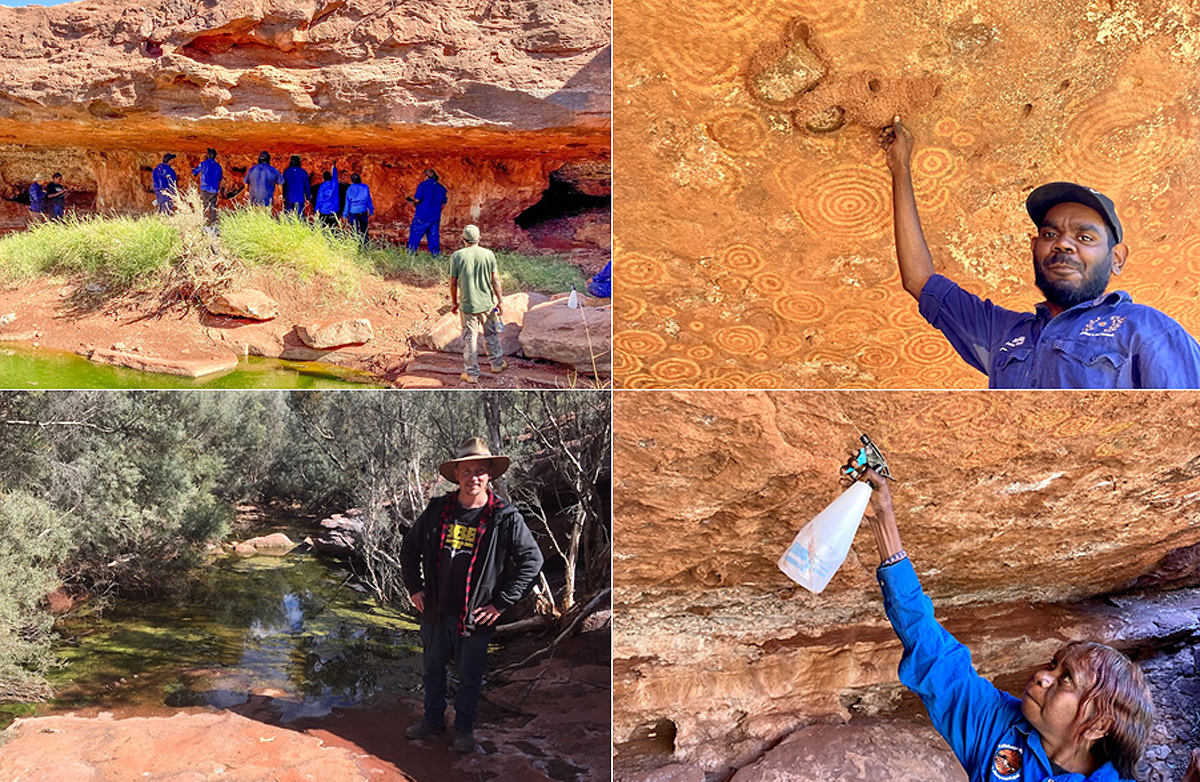 At Santa Theresa, just south of Alice Springs, the Ltyentye Apurte ranger group discovered that a flight of swallows had taken up residence on some of their ancient rock art. They consulted their fellow Kaltukatjara rangers from Docker River. Anton McMillan has been a Ltyentye Apurte ranger for three years and explained that the Kaltukatjara rangers were more experienced in the conservation of rock art. The rock art is found under a large open cave at the bottom of a cliff on the Santa Theresa Aboriginal Land Trust. The art is clearly ancient but yet to be officially dated.

Ltyentye Apurte ranger Anton McMillan explains that "We've actually been waiting on an anthropologist to come out to do a bit of a study on the rock arts to find out how old they are." There were several factors that contributed to the wear and tear of the artwork but, according to Mr McMillan, there was one that stood out among the rest. "One of the issues is just time, I reckon, so nature does the damage because there's a lot of build-ups of calcium because the rock art where we were doing the job is right under a waterfall that's dried off. Swallows' nests get built there every year, and when the seasons come round for the birds to have more babies, one of the problems is they build some of the nests right on top of the artwork."

During the wet season, the cave sits above a prominent waterhole that was home to many camps throughout the thousands of years that the Arrernte people have called it home. The paintings depict corroborees around waterholes, of important ceremonial meetings that the Arrernte people have taken part in throughout the generations. Peter Worsnop is the ranger coordinator and is in his second week on the job. He said it was an important job for the rangers to focus on. "We went out to a couple of rock holes the other day, we saw some swallows' nests that will probably need to be moved to preserve the art."

Mr Worsnop said the rangers had a busy schedule on the Santa Theresa homelands, but rock art protection would become a regular segment in their program. " use small sticks to gently break off all the nests because it's all built of mud build-up just chip away small pieces at a time," Mr McMillan said. The rangers use methylated spirits to soften the mud, before carefully brushing it off and separating it from the artwork. It was a very special job for the ranger group to be a part of, and Mr McMillan had an important piece of advice for any young kid wanting to take on the fulfilling role of a ranger.