This was the classical phrase used by ancient Roman and Medieval cartographers - literally, 'Here are Lions' - when denoting unknown territories on maps. The phrase can also be applied figuratively to the unknown territories of the Palaeolithic cave paintings of Chauvet. 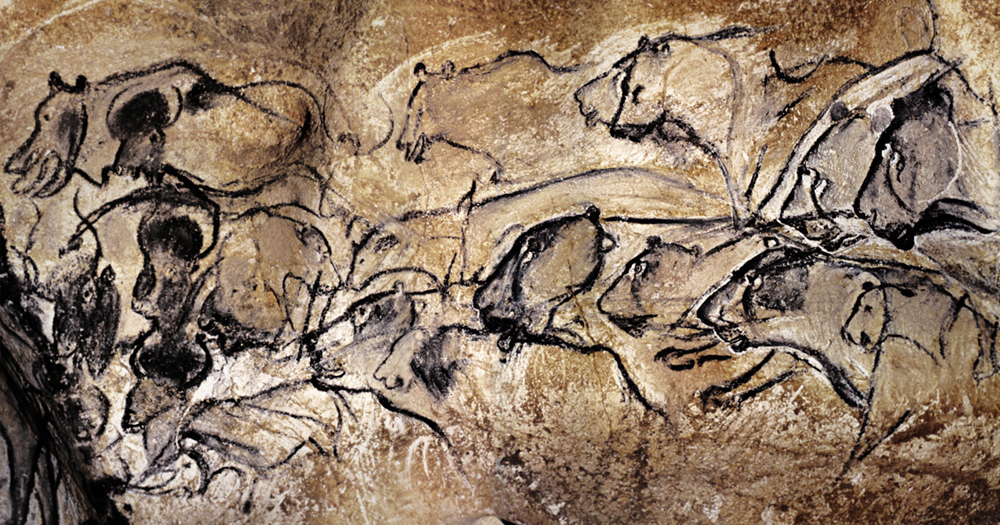 According to scientists the rock art of Chauvet is deeply mysterious; Jean-Michel Geneste explained how the art seemed to change each time it was studied. It brings to mind Heisenberg's Uncertainty Principle, relating to how we affect a particle we're attempting to measure. It also relates to Yuval Harari's observation in 'Sapiens: a Brief History of Humankind' on history:

'History cannot be explained deterministically and it cannot be predicted because it is chaotic. So many forces are at work and their interactions are so complex that extremely small variations in the strength of the forces and the way they interact produce huge differences in outcomes. Not only that, but history is what is called a 'level two' chaotic system. Chaotic systems come in two shapes. Level one chaos is chaos that does not react to predictions about it. The weather, for example, is a level one chaotic system. Though it is influenced by myriad factors, we can build computer models that take more and more of them into consideration, and produce better and better weather forecasts. Level two chaos is chaos that reacts to predictions about it, and therefore can never be predicted accurately.' If there is a particular hypothesis about the art, will this affect how we see the art, and therefore what we see in the art?

So how must we interpret the cave paintings of Chauvet? Our previous Latest News article 'Lion Man leaves unreadable message' describes how the 40,000 year-old carved sculpture was made as an avatar of particular symbolic and social messages, but messages that we can no longer read because the Palaeolithic social and symbolic culture remains unknown.

Does this render interpretation futile? No matter how much scientific analysis is applied to this material, the subjective perspective can never be entirely removed from the exercise.

A recent article in the National Geographic magazine by Chip Walter - First Artists - tackles this delicate subject: 'The greatest innovation in the history of humankind was neither the stone tool nor the steel sword, but the invention of symbolic expression by the first artists.'

What can we say with confidence about the art of Chauvet and its symbolism? Consider the time scale involved in this cave. Researchers now know that there was a temporal chasm, as C14 results have revealed two major periods of occupation; the Aurignacian period, around 31 to 32 thousand years ago, and the Gravettian period, around 25 to 26 thousand years ago. But over this chasm stretched an artistic legacy which represented an overall belief system, persisting with little change for over twenty millennia, ending only when the Ice Age finally drew to a close.

Interpreting this artistic legacy has always been contentious, and will be in the future, but the temptation to isolate and understand the earliest examples of symbolic expression of our direct ancestors will always remain.