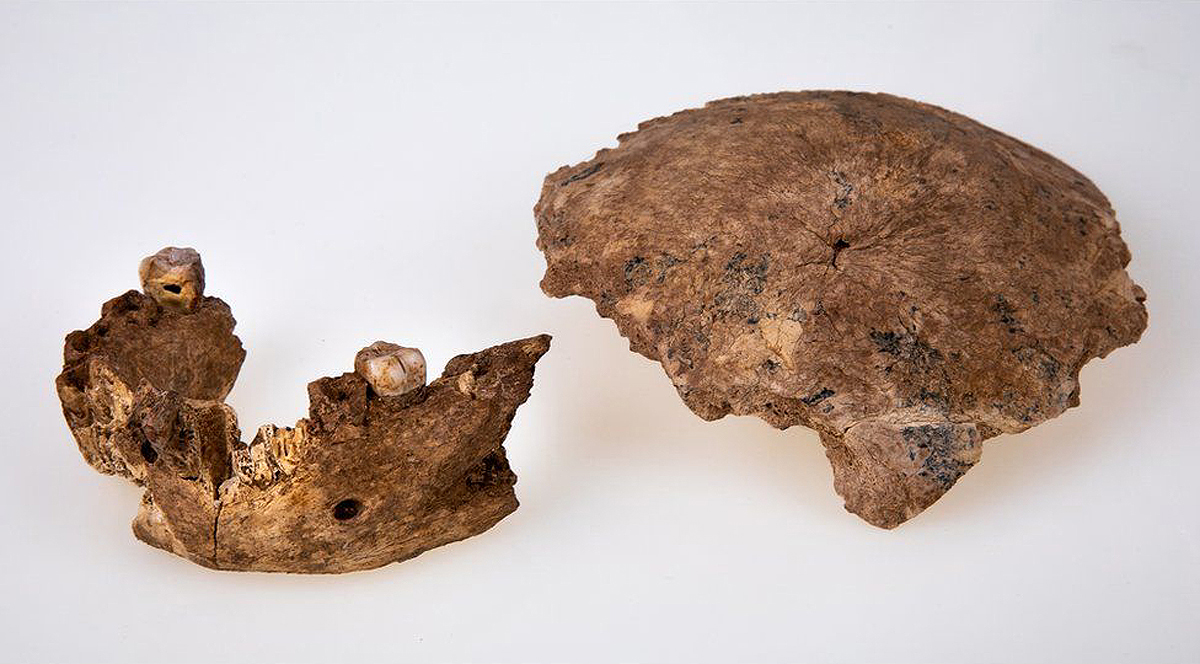 The team believes that the remains uncovered near the city of Ramla represent one of the "last survivors" of a very ancient human group. The finds consist of a partial skull and jaw from an individual who lived between 140,000 and 120,000 years ago. Details have been published in the journal Science. The team members think the individual descended from an earlier species that may have spread out of the region hundreds of thousands of years ago and given rise to Neanderthals in Europe and their equivalents in Asia. They have named the newly discovered lineage the "Nesher Ramla Homo type".

Dr Hila May of Tel Aviv University said the discovery reshapes the story of human evolution, particularly the picture of how the Neanderthals emerged; the general picture of Neanderthal evolution had in the past been linked closely with Europe. "It all started in Israel. We suggest that a local group was the source population," she told BBC News. "During interglacial periods, waves of humans, the Nesher Ramla people, migrated from the Middle East to Europe." 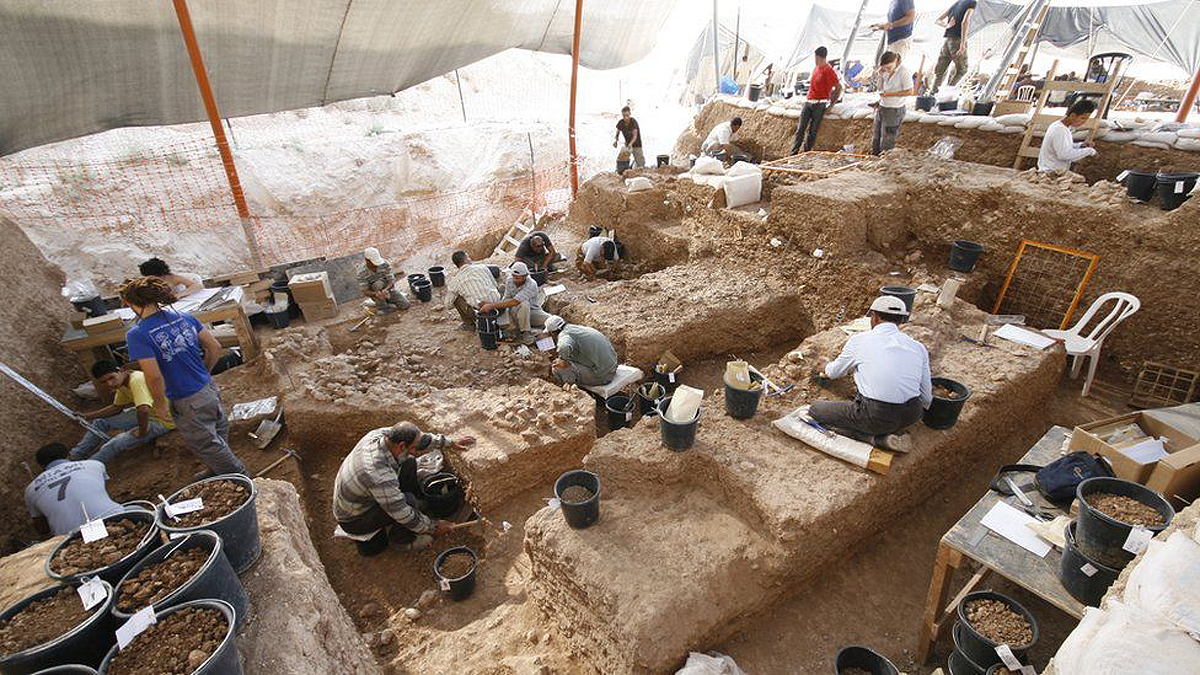 The human finds were uncovered during the excavation of a sinkhole. Thousands of stone tools and animal remains were also found. Image: YOSSI ZAIDNER

The team thinks that early members of the Nesher Ramla Homo group were already present in the Near East some 400,000 years ago. The researchers have noticed resemblances between the new finds and ancient "pre-Neanderthal" groups in Europe. "This is the first time we could connect the dots between different specimens found in the Levant" said Dr Rachel Sarig, also from Tel Aviv University. "There are several human fossils from the caves of Qesem, Zuttiyeh and Tabun that date back to that time that we could not attribute to any specific known group of humans. But comparing their shapes to those of the newly uncovered specimen from Nesher Ramla, justify their inclusion within the group." 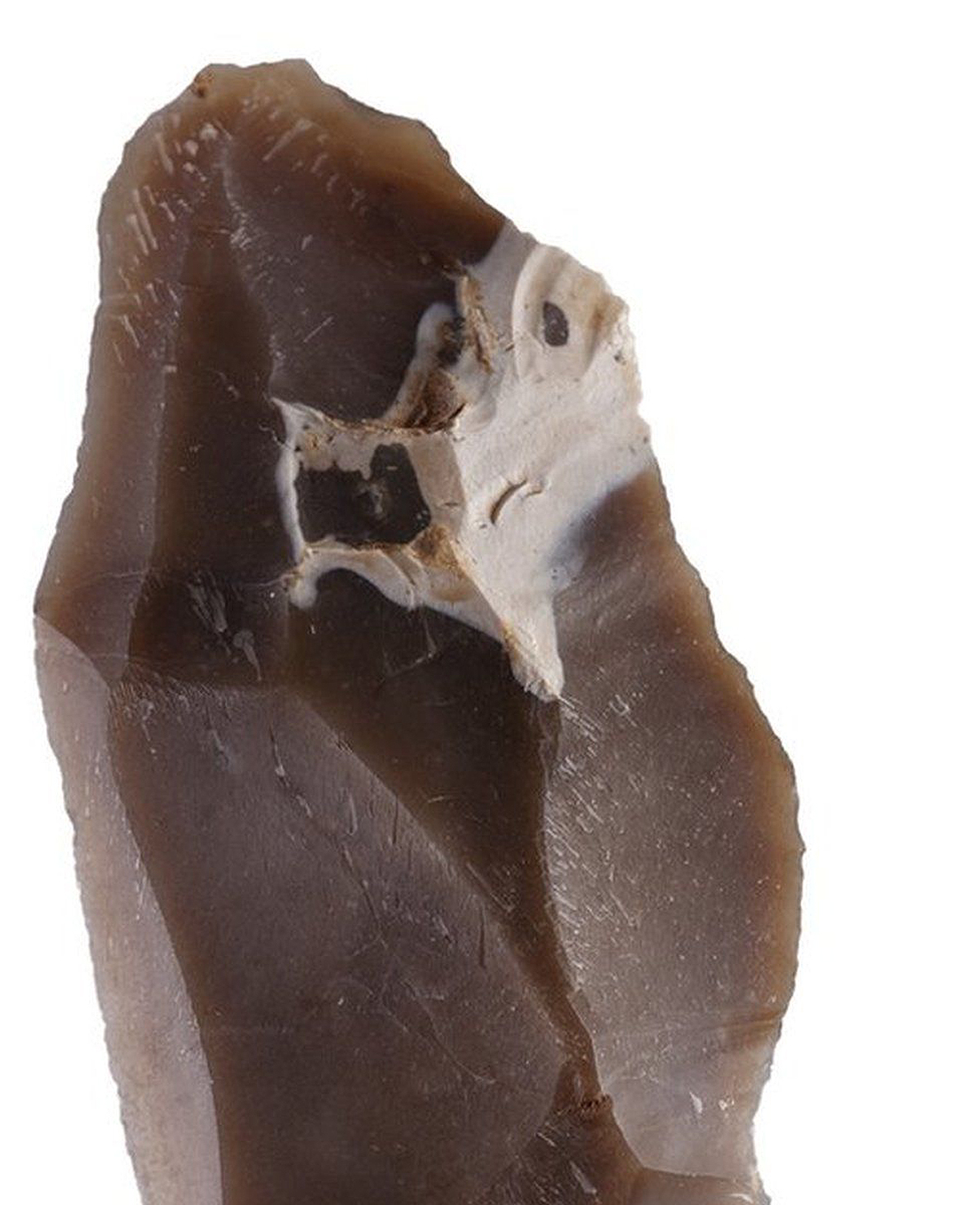 One of the stone tools used by the Nesher Ramla humans. It was produced with the same techniques used by modern humans at the time. Image: TAL ROGOVSKI

Dr May suggests that these humans were the ancestors of Neanderthals; "The European Neanderthal actually began here in the Levant and migrated to Europe, while interbreeding with other groups of humans." Others travelled east to India and China, explains Prof Israel Hershkovitz, suggesting a connection between East Asian archaic humans and Neanderthals in Europe. "Some fossils found in East Asia manifest Neanderthal-like features as the Nesher Ramla do."

The researchers base their claims on similarities in features between the Israeli fossils and those found in Europe and Asia, though their assertion is controversial. Prof Chris Stringer, from the Natural History Museum in London, has recently been assessing Chinese human remains; "Nesher Ramla is important in confirming yet further that different species co-existed alongside each other in the region at the time and now we have the same story in western Asia." "However, I think it's a jump too far at the moment to link some of the older Israeli fossils to Neanderthals. I'm also puzzled at suggestions of any special link between the Nesher Ramla material and fossils in China."

The Nesher Ramla remains themselves were found in what used to be a a sinkhole, located in an area frequented by prehistoric humans. This may have been an area where they hunted for wild cattle, horses and deer, as indicated by thousands of stone tools and bones of hunted animals. According to an analysis by Dr Yossi Zaidner at the Hebrew University of Jerusalem, these tools were constructed in the same manner that modern humans of the time also made their implements. Dr Zaidner adds "It was a surprise that archaic humans were using tools normally associated with Homo sapiens. This suggests that there were interactions between the two groups." "We think that it is only possible to learn how to make the tools through visual or oral learning. Our findings suggest that human evolution is far from simple and involved many dispersals, contacts and interactions between different species of human."