An article by Charles Q. Choi livescience.com - Oldest Neanderthal DNA Found in Italian Skeleton - reports on the calcite-encrusted skeleton of an ancient human still embedded in rock deep inside the cave of Lamalunga, near Altamura in southern Italy which has yielded the oldest Neanderthal DNA ever found. 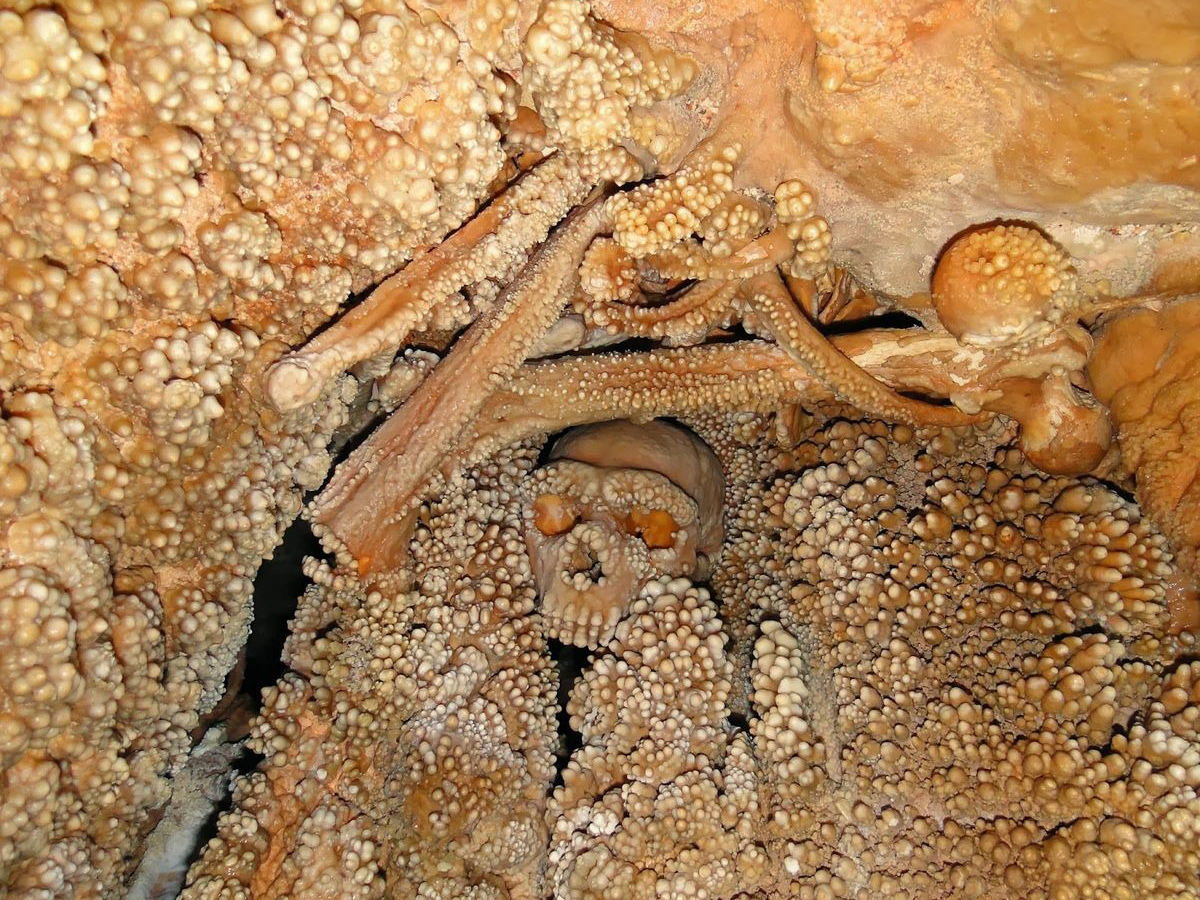 The remains of the 'Altamura Man', now considered a Neanderthal, encrusted with calcite formations in the cave of Lamalunga, near Altamura in southern Italy. Image: © Ministry of Cultural Heritage and Activities, Superintendent of the Archeology of Puglia.

Researchers believe that these molecules, which could be up to 170,000 years old, could one day help yield the most complete picture yet of Neanderthal life. The closest extinct relatives of modern humans were the Neanderthals, who lived in Europe and Asia until they went extinct about 40,000 years ago. Recent findings revealed that Neanderthals interbred with ancestors of today's Europeans when modern humans began spreading out of Africa; 1.5 to 2.1 percent of the DNA of anyone living outside Africa today is Neanderthal in origin.

In 1993, scientists found a skeleton of an ancient human amidst the stalactites and stalagmites of the limestone cave of Lamalunga, near Altamura in southern Italy. Study co-author Fabio Di Vincenzo, a paleoanthropologist at Sapienza University of Rome, explains that "The Altamura man represents the most complete skeleton of a single non-modern human ever found. Almost all the bony elements are preserved and undamaged."

The Altamura skeleton bears a number of Neanderthal traits, particularly in the face and the back of the skull. However, it also possesses features that usually aren't seen in Neanderthals. For instance, its brow ridges were even more massive than those of Neanderthals.These differences made it difficult to tell which human lineage the Altamura man might have belonged to. The new research of DNA taken from a piece of the skeleton's right shoulder blade confirms the Altamura fossil was a Neanderthal, dating it to about 130,000 to 170,000 years old. This makes it the oldest Neanderthal from which DNA has ever been extracted.

The bone is so old that its DNA is too degraded for the researchers to sequence the fossil's genome with current technology, explains study co-author David Caramelli, a molecular anthropologist at the University of Florence in Italy. Future technology will certainly answer more questions about Neanderthals' genetics, anatomy, ecology and lifestyle, and of course, human evolution.

The scientists detailed their findings in the Journal of Human Evolution.