An article by Sarah Sloat on inverse.com - Neanderthals may have taught humans to join a 'cult' 130,000 years ago - reports on the golden eagle and its special role in human culture. It was also important to Neanderthals. 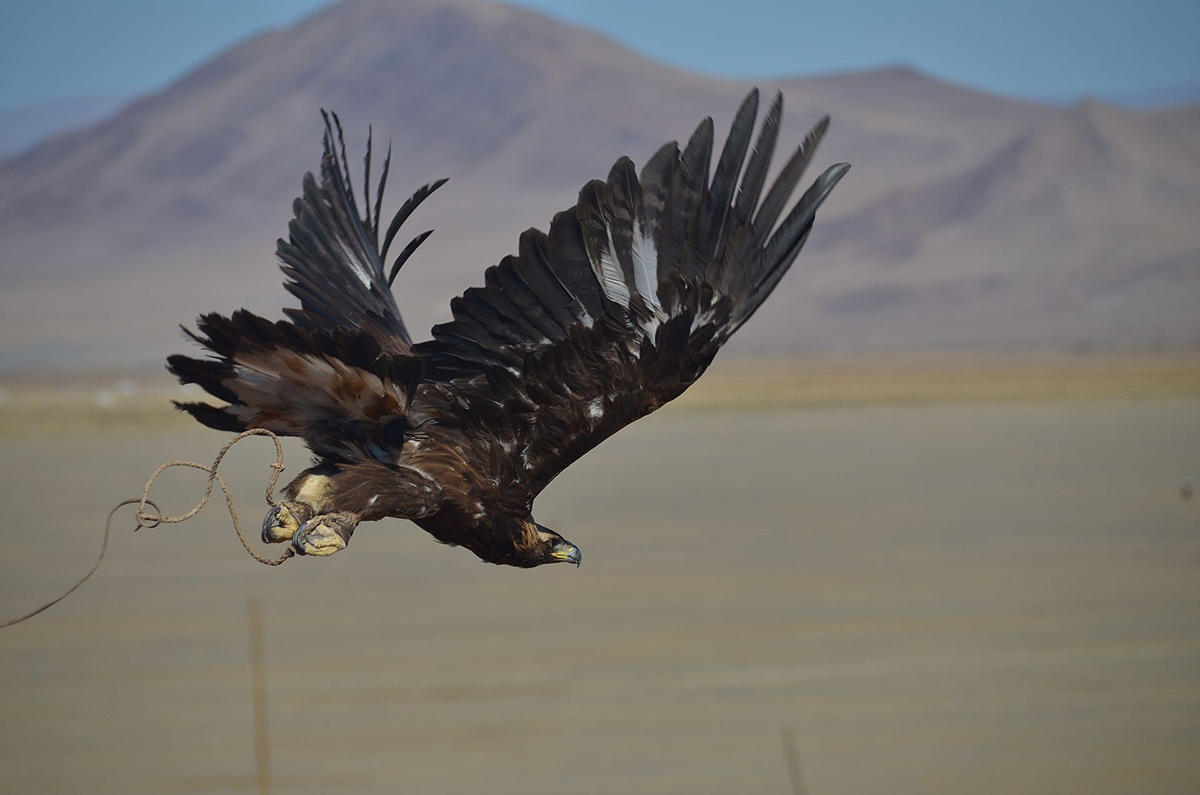 The Altai Mountains, a jagged set of ridges named after the Mongolian word for gold, stretch from the Gobi Desert to the Siberian Plain. Fittingly, they are home to the golden eagle and, on occasion, nomadic hunters climb high up these mountains to capture golden eagle nestlings. These eagle hunters participate in a modern version of an ancient relationship, one that is so old it didn’t originate with Homo sapiens at all.

Another sort of human once lived in the Altai Mountains as well - Homo neanderthalensis, aka the Neanderthals. In a study titled “Neanderthals and the cult of the Sun Bird,” published this month in Quaternary Science Reviews, a team of anthropologists reveals that Neanderthals trapped and hunted golden eagles at least 130,000 years ago. This suggests that Neanderthals were the first humans to practice catching these eagles with seven-foot wingspans, a behavior that the researchers think modern humans later learned from Neanderthals. 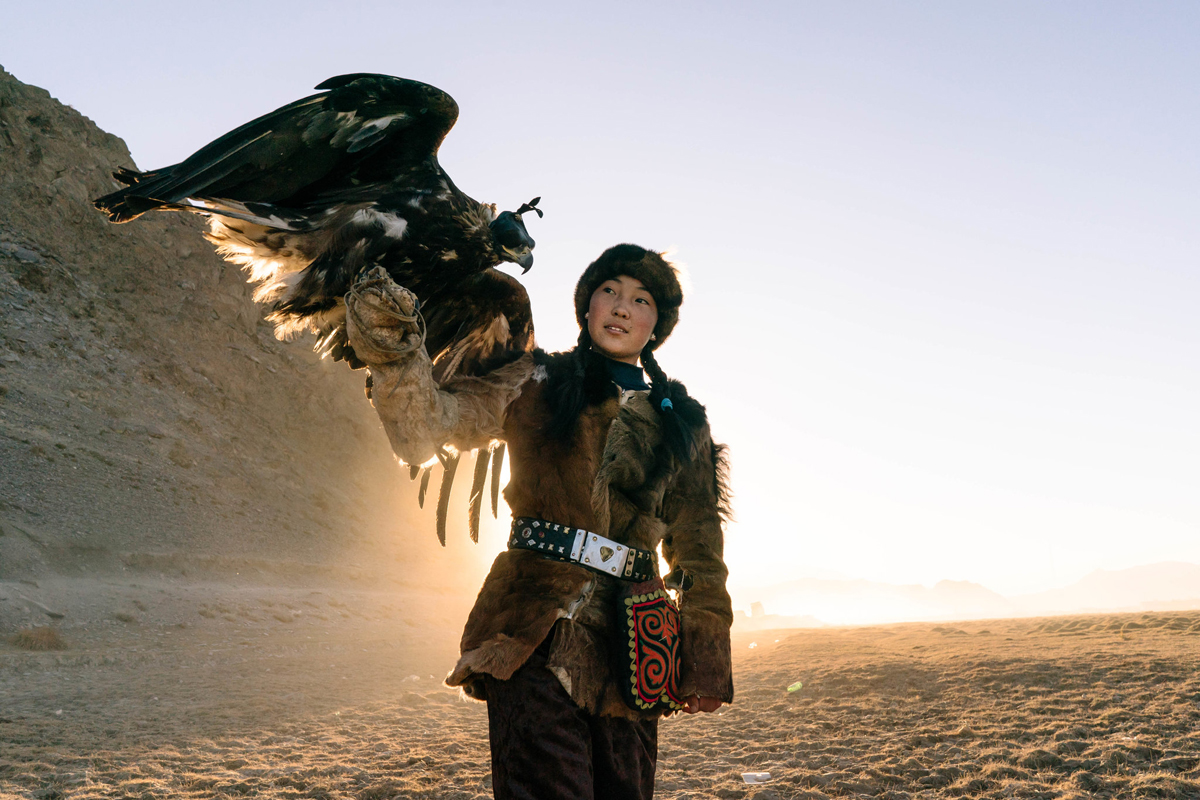 Zamanbol, 14, is an eagle huntress. A Kazakh nomad in the Altai region of Mongolia. Image: Hannah Reyes Morales for The New York Times.

After combing through previous research on sites where Neanderthals lived, the four-person team — three of which are a family of scientists — noted the remains of golden eagles have been found at 26 sites. These were not the only birds the Neanderthals captured; bones belonging to vultures, other eagle species, ravens, and jackdaws have been found at Neanderthal sites as well. Because golden eagles nest at inaccessible cliff edges, it’s theorized that Neanderthals ambushed and caught them when they flew down to feast on carcasses. 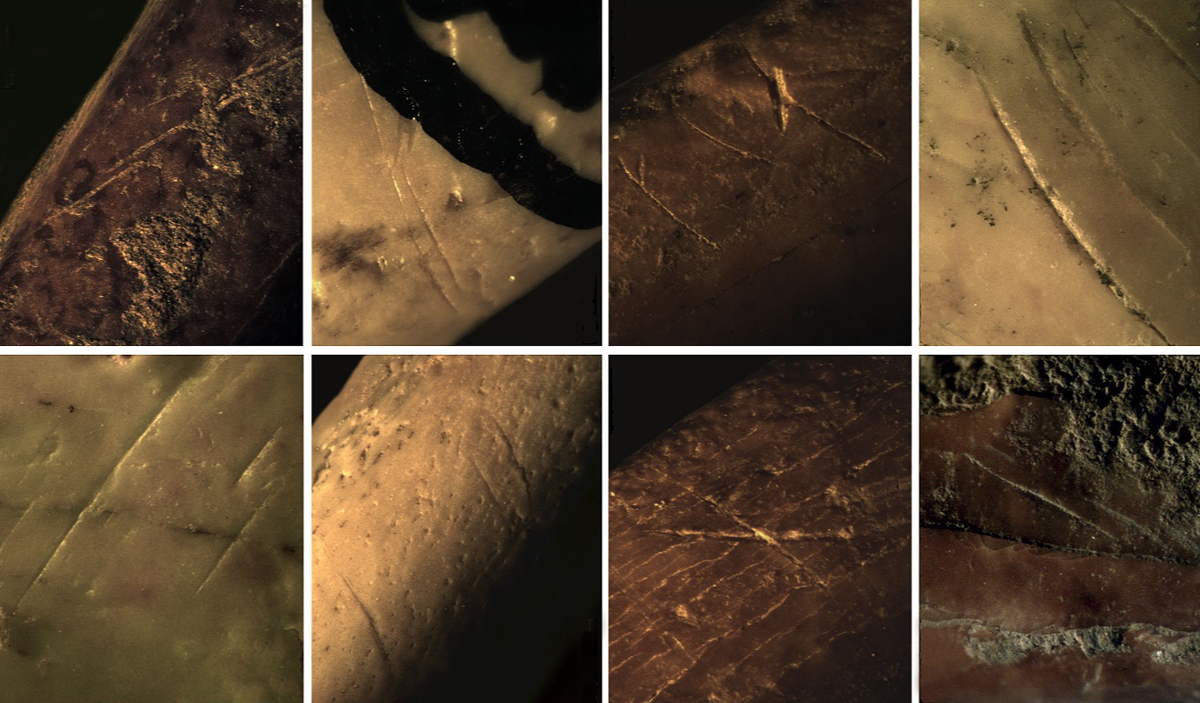 The golden eagle seemingly was a bird of special importance to the Neanderthals. It’s the bird of prey they captured most frequently, and the way it was butchered indicates that it wasn’t sought out purely for food. Importantly, the discovered golden eagle wing bones have cut marks along them. Wing bones contain little meat, so the idea is that what was being sourced were their feathers. Additionally, the bones also contain cut marks between the legs and feet, a sign that the Neanderthals were removing claws and talons. Golden eagle jewelry specifically hasn’t been found, but white-tailed eagle jewelry has, so it’s likely the feathers served a similar purpose.

Co-author Stewart Finlayson, Ph.D., the director of the natural history department at the Gibraltar National Museum, explains that catching eagles for feathers and talons “suggests symbolic capacities not previously ascribed to Neanderthals. We are changing our understanding of the Neanderthals and reversing the notion that they were ape-like brutes. The idea has been that modern humans were much more intelligent and taught the Neanderthals. Here, we show that the practice of catching eagles began long before any modern humans arrived in Eurasia from Africa.”

The context for associating symbolism with golden eagle feathers and talons is, however, decidedly human. These birds of prey are found across North America, Europe, and Asia. In turn, where they are found, there is a history of humans paying a certain level of reverence to the bird. In North America, indigenous tribes see the golden eagles as sacred and the emissary of gods. It’s the national symbol of five countries and plays a role in the mythology of the Celts, Norse, Romans, and Greeks.

The overpowering of golden eagles by Neanderthals also represents a change in a power dynamic. Eagles once preyed upon another human relative, Australopithecus africanus, and even took down Neanderthal children. More archaeological finds are needed to demonstrate how Neanderthals mastered their own attacks, but the evidence they did is in the bones that surrounded their homes.