Human Origins - Walking and Climate; the modern human migration out of Africa, and its relation to both global climate and human origins. 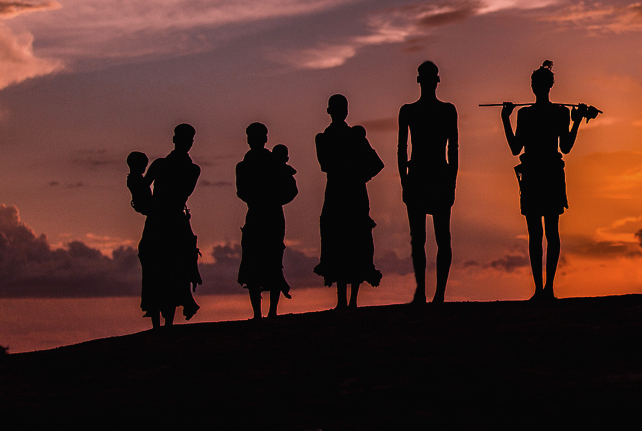 The Songlines (1987) by Bruce Chatwin is a novel of ideas. Although set among the Aboriginal camps of Central Australia, the book nevertheless asks and tries to answer the question of questions: why is man the most restless and dissatisfied animal on earth? What is the source of this restlessness? Could it be, he asks, that we came into being because we were a species which had to migrate with the seasons - and perhaps still should do? Why do wandering peoples conceive of the world as perfect whereas sedentary ones are forever trying to change it?

This segues to Professor Stephen Oppenheimer's Out of Eden (2003). The publication represents the source material for  the Journey of Mankind Genetic Map which charts the global journey of modern humans over the last 160,000 years. The map, based on a synthesis of the mtDNA and Y chromosome evidence with archaeology, climatology and fossil study, demonstrates the interactions of migration with climate over this period. Oppenheimer is proposing that there was a single successful exit from Africa between 75,000 and 85,000 years ago. The male and female genetic trees show only one line each coming out of Africa. Our physical and behavioural adaptations were focussed on surviving the struggle with our greatest enemy and sternest teacher - climate.

In Out of Eden Oppenheimer also looks deeper, and explains some fundamentals about human origins:

As we know from the effects of our recent ice age, the worst phase of the climate cycle, although brief, can cause widespread extinctions. Only the survivors of such climatic episodes can pass on their own genetic type, holding special features that may have been selected for by the environment. Around 7-8 million years ago, a dramatic reduction in the number of ape species coincided with several million years of global cooling and grassland expansion. Some have suggested that this short ice epoch already marks the time of the split between our ancestors and the ancestors of modern chimpanzees. The most important initial physical change in our ancestors, bipedalism (walking on two legs) may have its roots in that time. At present, however, the first clear evidence for bipedalism is seen only in skeletons of Australopithecus anamensis, a walking ape dating from 4 million years ago and found on the shores of Lake Turkana, in northern Kenya, in 1995.

In The Songlines we read more about this:

That man is a migratory species is, in my opinion, born out by an experiment made at the Tavistock Clinic in London and described by Drjohn Bowlby in his Attachment and Loss.

Every normal baby will scream if left alone; and the best way of silencing these screams is for the mother to take it in her arms and rock or 'walk' it back to contentment. Bowlby rigged up a machine which imitated, exactly, the pace and action of a mother's walk; and found that, providing the baby was healthy, warm and well-fed, it stopped crying at once. 'The ideal movement', he wrote, 'is a vertical one with a traverse of three inches.' Rocking at slow speeds, such as thirty cycles a minute, had no effect: but once you raised the pace to fifty and above, every baby ceased to cry and almost always stayed quiet.

Day in, day out, a baby cannot have enough walking. And if babies instinctively demand to be walked, the mother, on the African savannah, must have been walking too: from camp to camp on her daily foraging round, to the waterhole and on visits to the neighbours.