First Human discovered in Ethiopia; jawbone fossil is pushing the human line back by 400,000 years, and helping to define the link between Australopithecus and early Homo. 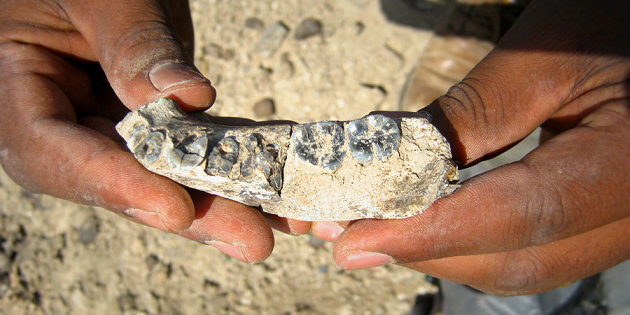 Archaeologists are claiming that a recent find is narrowing the gap between apes and humans, or more accurately between Australopithecus and early Homo. Not only that, the fossil jawbone known as LD 350-1, dating back to 2.8 million years, suggests that the first humans emerged 400,000 years earlier than previously thought.

This usurps the earliest claim for the Homo genus known as 'Lucy', 2.3 million years old, which had been discovered in the vicinity. 'Lucy' belonged to the species Australopithecus afarensis, which researchers are now considering as the final evolutionary step to primitive humans - Homo habilis.

Anything older than 2.3 million years old is both hard to find and poorly preserved. But the discovery in the Ledi-Geraru research area, Afar Regional State, by Dr Brian Villmoare, from the University of Nevada, and Dr William Kimbel, director of the Institute of Human Origins at Arizona State University, appears to have overcome such problems.

The jawbone demonstrates smaller teeth than those of Australopithecus, an important transition in human evolution. It probably coincided with the transition from tree dweller to upright walker. All of these transitions are believed to have been triggered by climate change in this region of Africa. An analysis of the fossilised plant and animal life in the area suggests that what had once been lush forest had become dry grassland. This new environmental niche may have encouraged new hunting techniques, in turn encouraging different diets that led to smaller jaws and teeth.

Whilst half a jawbone is not conclusive, it is a significant discovery, adding to other evidence of early human-like characteristics in other parts of Africa. Gradually the picture of what it is to be human - small jaws, large brains, bipedal, tool-makers, and fire - is emerging.

Read more about the hominid evolutionary tree in the ORIGINS section: