Colin Barrass reports in NewScientist on the ever-emerging picture of our Neanderthal cousins as more and more archaeological evidence is found and interpreted. 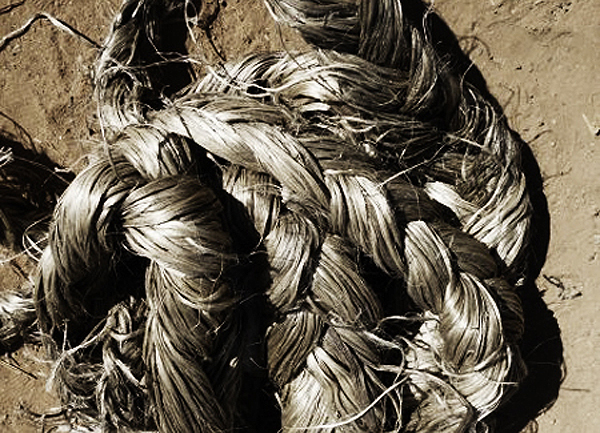 Call it prehistoric string theory. The earliest evidence of string has been found - apparently created by our Neanderthal cousins.

Perishable materials usually rot away, so the oldest string on record only dates back 30,000 years. But perforations in small stone and tooth artefactsfrom Neanderthal sites in France suggest the pieces were threaded on string and worn as pendants. "The wear patterns provide circumstantial evidence of early use of string, but the evidence is not definitive," says Bruce Hardy at Kenyan College in Gambler, Ohio. Similar circumstantial evidence has been found in perforated shells.

Now, Hardy and his colleagues have found slender, 0.7-millimetre-long plant fibres that are twisted together near some stone artefacts at a site in south-east France that was occupied by Neanderthals 90,000 years ago. Such fibres are not twisted together in nature, says the team, suggesting that the Neanderthals were responsible (QuaternaryScience Reviews, doi.org/pzx).

"If they are indeed remnants of string or cordage, then they would be the earliest direct evidence of string," says Hardy. "Albeit very fragmentary evidence."

At 90,000 years old, the material purported to be string predates the arrival of Homo sapiens in Europe, That means the Neanderthals occupying the French site learned to make it themselves, rather than imitating modern humans, says Hardy. In fact, a growing body of evidence suggests our extinct cousins developed a number of sophisticated behaviours - and perhaps even taught some skills to our species when the two met.

Last year, stone tools created by Neanderthals were found on Mediterranean islands, hinting that the species may have made and used boats to cross the sea - although no direct evidence of boats has been found. Hardy points out that sturdy ropes would have been necessary to build and use rafts and boats. "The ability of Neanderthals to manufacture string and cordage certainly does make the idea of Neanderthal seafaring more plausible," he says.