An article on theguardian.com - Piece of skull found in Greece is oldest human fossil outside Africa - reports on the remains discovered on Mani peninsula in Greece which could rewrite history of Homo sapiens in Eurasia. 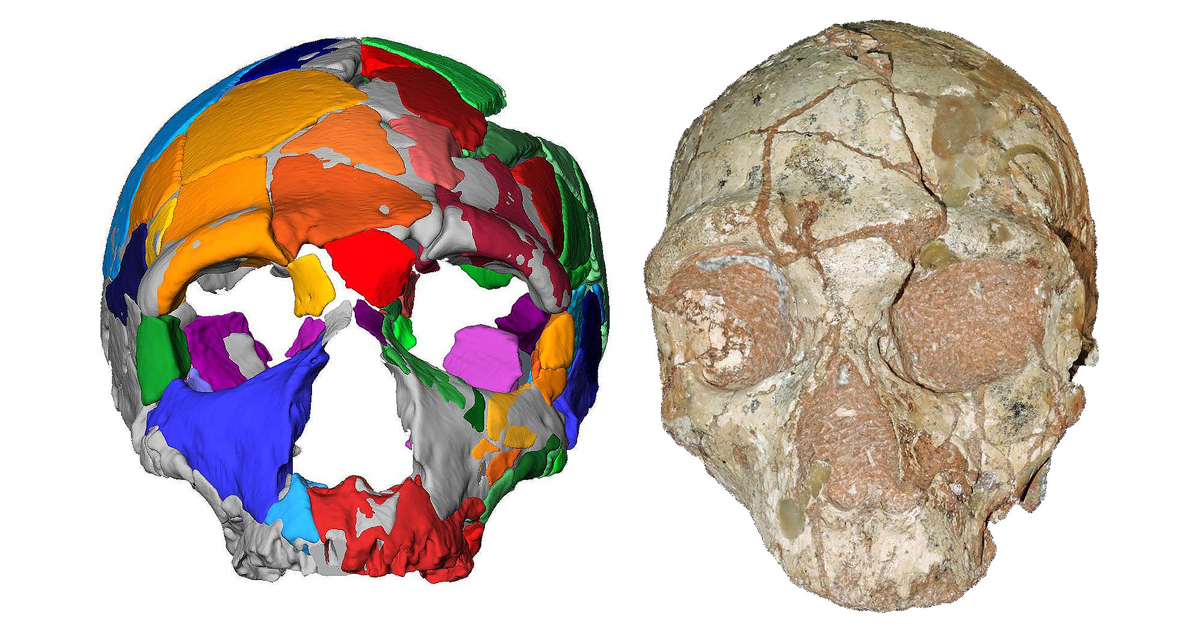 The Apidima 1 partial cranium (right) and its reconstruction. The rounded shape of the skull is a unique feature of modern humans and contrasts with Neanderthals and their ancestors Photograph: Katerina Harvati, Eberhard Karls/University of Tübingen

Researchers claim that a broken skull chiselled from a lump of rock in a cave in Greece is the oldest modern human fossil ever found outside Africa. The partial skull was discovered in the Apidima cave on the Mani peninsula of the southern Peloponnese and has been dated to be at least 210,000 years old. If the claim is verified - and many scientists want more proof - the finding will rewrite a key chapter of the human story, with the skull becoming the oldest known Homo sapiens fossil in Europe by more than 160,000 years. 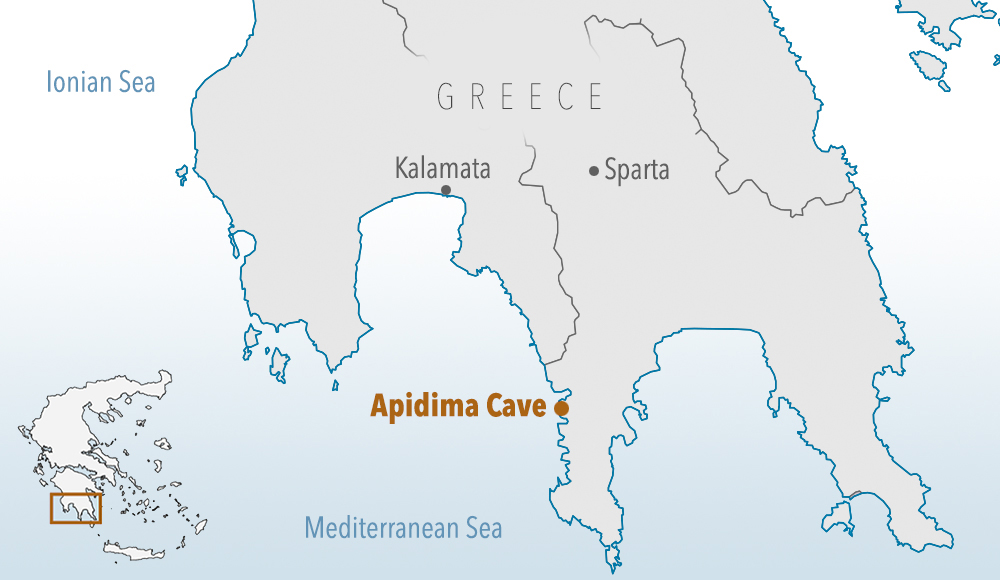 The partial skull was found in the Apidima cave

Katerina Harvati, the director of paleoanthropology at the University of Tübingen in Germany, said the skull revealed that at least some modern humans had left Africa far earlier than previously thought and reached further geographically to settle as far away as Europe. Other fossils of early modern humans found in Israel already point to brief excursions out of Africa, where the species evolved, long before the mass exodus during which Homo sapiens spread from the continent about 70,000 years ago and colonised the world. Paleontologists view the excursions as failed dispersals, with the pioneers ultimately dying out and leaving no genetic legacy in people alive today. Karvati explains that the results indicate that an early dispersal of Homo sapiens out of Africa occurred earlier than previously believed, before 200,000 years ago, and that we are seeing evidence for human dispersals that are not just limited to one major exodus out of Africa.

For some researchers, however, the claim is bolder than the evidence can bear. Experts contacted by the Guardian doubted whether the skull really belonged to a modern human, and had concerns about the dating procedure. Flaws in either could fatally undermine the scientists' narrative. The story of the skull is unusual from the start. It was found during excavations of the Apidima cave, a hole in a limestone cliff that now towers over the sea, in the late 1970s. The fossil was encased in a lump of rock, mere inches from another skull and several bone fragments. The rock itself was wedged high up between adjacent walls of the cave. Once removed from the cave, the skulls were stored in a museum in Athens but received little attention until recently, in part because they are so damaged and incomplete. The second skull, which retains a face, was studied the most and identified as Neanderthal. The first skull, consisting only of the back of the skull, was largely ignored.

Harvati and her co-workers set out to examine both. They took CT scans of the fossils and from these created virtual 3D reconstructions. The 3D models were then compared with skulls from various ancient Homo sapiens, Neanderthals and modern humans.

Writing in the journal Nature, the scientists describe how their analysis confirmed the second skull, which has a thick, rounded brow ridge, as Neanderthal. But to their surprise, the other partial skull most closely matched that of a modern human. The main evidence was the rounded back and the lack of a classic Neanderthal bulge - the part that is preserved, the back of the skull, is very diagnostic in differentiating Neanderthals and modern humans from each other and from earlier archaic humans. 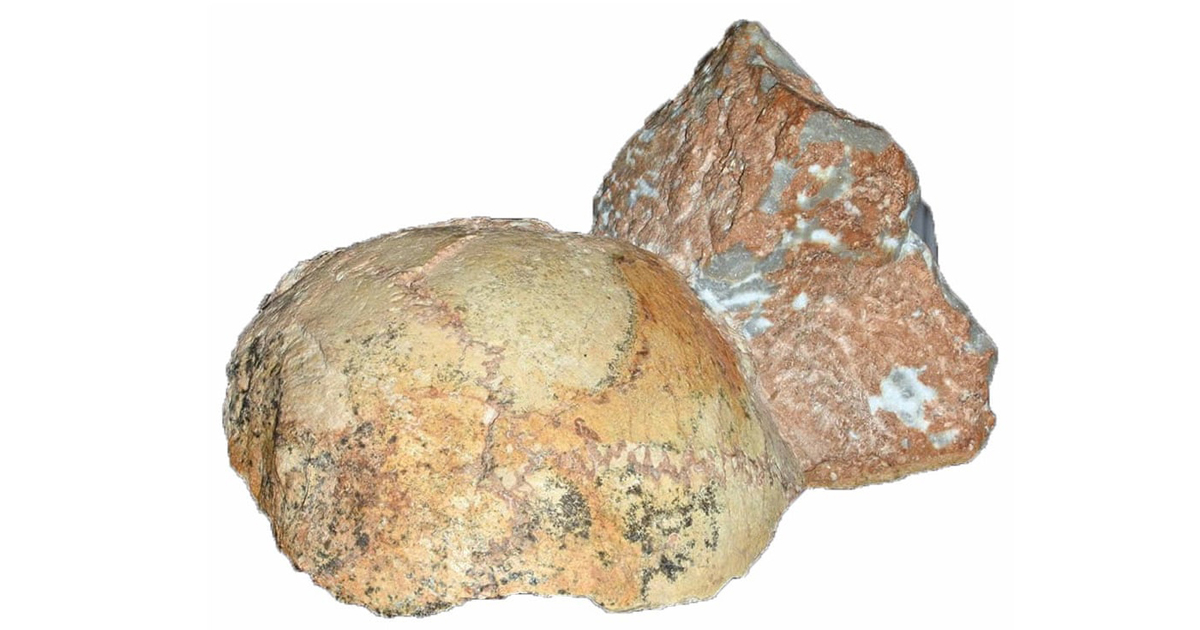 Scientists on the team then dated the fossils with a method that relies on the radioactive decay of natural uranium in the buried remains. The tests found the Neanderthal skull to be at least 170,000 years old and the Homo sapiens skull at least 210,000 years old, with the rock encasing them more than 150,000 years old. The range of ages could be explained by the skulls mixing together in a mudflow that later solidified in the cave.

If at least some early modern humans left Africa more than 210,000 years ago, they may have settled in the Levant before expanding west into Europe, which was already home to Neanderthals. Last year, a modern human fossil dating to nearly 200,000 years old was found in the Misliya cave in northern Israel. Any early human pioneers who did reach Europe died out there, before the Neanderthals themselves were replaced by an influx of Homo sapiens about 40,000 years ago.

Some scientists are calling for more evidence. Warren Sharp at the Berkeley Geochronology Center in California said the team's tests on the supposedly modern human skull had produced wildly different dates, a sign that uranium may have been lost from the bones over time. This means the fossil's calculated age is too old, and its true age is unknown. Juan Luis Arsuaga, a Spanish palaeoanthropologist, said he was not convinced the skull was from an early modern human. He explains that the fossil is too fragmentary and incomplete for such a strong claim. John Hawks, a palaeontologist at the University of Wisconsin, Madison, agrees.